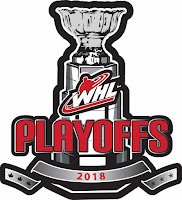 --The battle for the Ed Chynoweth Cup is underway.  The Kelowna Rockets and Tri-Cities Americans got their Western Conference best of 7 series going.  It saw the Americans shock the Rockets at Prospera Place as Michael Rasmussen and Morgan Geekie each had a pair in a 5-0 win.

On Friday night, the other seven series will get underway including Regina at Swift Current and Prince Albert at Moose Jaw

--The Chicago Blackhawks were officially eliminated from the playoffs after losing to Vancouver 5-2. It means for the first time since 1969 the Stanley Cup playoffs won't have Detroit or Chicago in them. Meanwhile, Anze Kopitar scored four times as the Kings blasted Colorado 7-1

--A trade in the NFL. The Giants sent defensive lineman Jason Pierre-Paul to Tampa for the Bucs 3rd round pick (69th overall) with the two teams swapping 4th round picks. It is thought this could result in the Giants taking defensive lineman Bradley Chubb with the number two pick overall in the draft and forgo taking a quarterback that will eventually replace Eli Manning.

--After a strong start to his first round at the Corales Puntacana Resort & Club Championship, Tony Romo struggled coming home as he shot a 41 on the back nine that included three bogeys and a double in his first ever PGA Tour round

Romo, the former Cowboys quarterback and current NFL analyst with CBS Sports, actually made three birdies on the front nine en route to an even-par 36, but his 5-over 77 cleared just one golfer, Guy Boros (who shot a 7-over 79), at the time Romo was finished.

--The first 9 vs 11 matchup in the history of the NCAA Mens Basketball Tournament will happen Saturday. Loyola-Chicago continued its Cinderella run as they edged Nevada 69-68. Loyola-Chicago has won their three games at "March Madness" by a combined four points. They will play Kansas State who beat favoured Kentucky 61-58