Vic Rauter Says A 16 Team Brier Is Not Needed 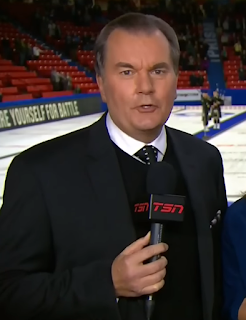 Curling fans going to the Brandt Centre for the Tim Hortons Brier this week can expect to see a different format.

As was the case at the 2018 Scotties Tournament of Hearts in Penticton, the field now consists of 16 teams with all provinces and territories  being represented.

While 15 rinks are known, the 16th will be determined Friday night when Mike McEwen and Jason Gunnlaugson play in the wild-card game with the winner moving on and the loser going home.  Those two rinks were ranked the highest on the Canadian Team Rankings System that did not get out of their province.  Both curl out of Winnipeg with the Manitoba spot being claimed by Reid Carruthers.

It is a format that Canada’s voice of curling is not a fan of.

TSN’s Vic Rauter will be alongside Russ Howard and Cheryl Bernard bringing the event to Canadians from coast-to-coast starting tonight with the wild-card game between Mike McEwen and Jason Gunnlaugson.  He wonders if a 16 team field is really needed.

“It’s politics, it’s being politically correct and including everyone and there’s nothing wrong with that.” Rauter said. “I just question whether all the Territories and some of the provinces should be granted a spot at this time. When you only have three teams playing in Northern Ontario, why wouldn’t you put Ontario and Northern Ontario back together again.  Why wouldn’t you have a three team playdown between Nunavut, the Yukon and the Territories for a spot.  In this age of political correctness and inclusivity though, we are going to put everyone in meaning you need a 16th team. How will it sound if Team Wildcard is your winner?"

At the end of the day, Rauter believes Regina curling fans will see a very competitive week of curling with many good rinks in the field.

“This is a very talented field. Some of the skips could have been in Pyeongchang. “Rauter states.”  Will we see PEI’s Eddie McKenzie or Nova Scotia’s Jamie Murphy win it all? Could they  have the week of their life? Well, we never thought Canada wouldn’t win a medal at the Olympics right?  I think Steve Laycock has just as much a chance as Brad Gushue, Brad Jacobs, Reid Carruthers or John Epping to win.  Rinks that have experience at this level will likely come out on top.  It will be outstanding.”

Steve Laycock of Saskatchewan is in a pool with Manitoba, Ontario, Northern Ontario, Quebec, New Brunswick, Nunavut and Prince Edward Island. His first game will be in the first draw Saturday afternoon at 2 against Quebec’s Mike Fournier.

The final goes Sunday night with the winner representing Canada at the Worlds in Las Vegas March 31-April 8.
at 3/02/2018


Vic is right. No need for Northern Ontario, a wild-card, two of the three Northern teams and Team Canada. I can see an argument for Team Canada, but not the others.

Do $$ play into this? It's the only explanation as to why this would be done.