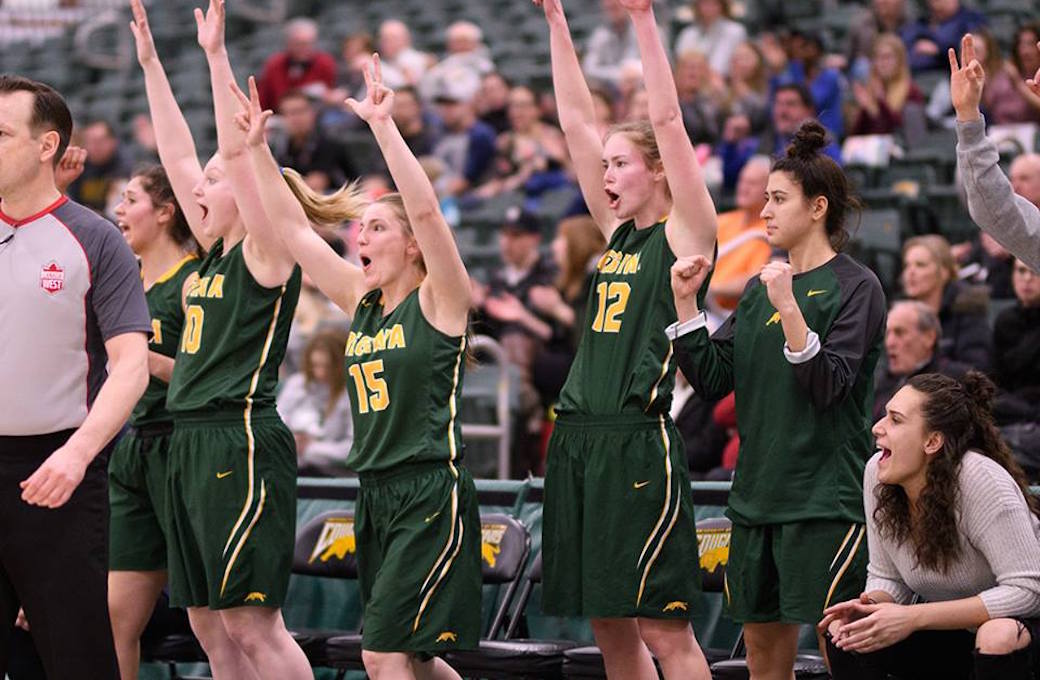 When the U SPORTS Women’s Basketball Final 8 tournament tips off on Thursday, the Regina Cougars will be hoping to capture their first Bronze Baby in nearly two decades on their home floor.

The Cougars, who last won the national title in 2001, begin their championship quest as the No. 2 seed, behind the undefeated and top-ranked Carleton Ravens, who arrive in the provincial capital in search of their first-ever national championship.

The 2018 U SPORTS Women’s Basketball Final 8 kicks off on Thursday at the Centre for Kinesiology Health and Sport and concludes next Sunday with the gold-medal final at 7:30 p.m. ET / 4:30 p.m. PT. The semifinals and final will be broadcasted live on Sportsnet 360 and SN NOW. All remaining games livestreamed at USPORTS.LIVE.

The Carleton Ravens women’s basketball team enjoyed the most successful regular season in team history in 2017-18. While last year’s unprecedented team triumphs – which included the program’s first U SPORTS Final 8 medal (bronze) and an OUA Critelli Cup championship title - would have left most teams satisfied, the Ravens entered this season on a mission for conference and national glory once again. Carleton cruised through the OUA regular season to finish with a perfect 23-0 record, ending the campaign with the No.1 ranking in the final U SPORTS women’s basketball national poll for the first time. Although Carleton possesses a balanced fourth-ranked offence capable of putting up big scoring numbers (72.4 PPG), the team’s stingy defence has held opponents to nation-leading 45.9 points per game this year. With a deep and experienced group of seniors leading the charge, the Ravens are poised to make another deep postseason run to the national title in Regina.

The Cougars will look to finish off what’s been a wildly successful season so far.
The team started out the year with an impressive 9-1 non-conference record which included a road win over Carleton and a neutral-site win over Acadia before marching through the Canada West schedule with an 18-2 record. And the Cougars have been perfect on home court in the postseason, winning a pair of best-of-three series in two straight games to advance to the Canada West championship game, which they took over Saskatchewan by a 75-55 count on Friday.

The Cougars, who will take a 32-3 overall record into their Thursday quarter-final will be led by Canada West first-team all-star Kyanna Giles, third-team all-star Charlotte Kot, and Canada West Rookie of the Year Carolina Goncalves.

Last season’s disappointment was quickly forgotten, as the Axewomen’s 2007-18 season was peppered with team records including 18 wins and two losses in regular season play.
At the start of the AUS regular season, the Axewomen were ranked third in the
U SPORTS Top 10 national rankings and for five weeks held onto the top spot at the No. 1 position. With a 7-0 record at the Christmas break, the Axewomen extended their winning streak to 11-0 until they were finally beaten by a young and feisty UPEI Panthers.

Dropping to No. 4 in the U SPORTS Top 10 after the loss to UPEI, the Axewomen continued their winning ways, losing only one more additional game, 84-83, to the second place Cape Breton Capers. With a first place 18-2 AUS regular season record and third-ranked in the U SPORTS Top 10 rankings, the Axewomen earned a quarter-final bye at the AUS Final 6 Championship, before beating Saint Mary’s and UPEI to capture the AUS title.

The reigning U SPORTS champion Martlets return to the Final 8 tournament looking to defend their first-ever national title from last season. McGill posted an 11-5 record and swept through the conference playoffs, beating Bishop’s in the semifinal before narrowly defeating Laval 56-52 for its seventh consecutive RSEQ banner. Conference Player of the Year and First Team All-Star Alex Kiss Rusk led the way with 14.3 points and 11.8 rebounds per game, while Frederique Potvin was named a Second Team All-Star.

The Marauders completed the OUA regular season at 20-4, winning the newly-realigned OUA West Division after reeling off 14 consecutive wins to close the conference season after the holiday break. They defeated the Western Mustangs at the OUA quarter final stage for a second consecutive year to advance to the conference semifinals with a 61-51 win. McMaster’s 47-46 win over the Ottawa Gee-Gees in an OUA semifinal saw them advance to the OUA title game for the first time since winning their fourth conference banner in 2008, and serve as championship hosts for the first time since 2007.

For the 10th time in 11 seasons, the Saskatchewan Huskies will appear in the U SPORTS Women’s Basketball Final 8.

The Huskies started the Canada West regular season 8-0, before losing their first of three games in the 2017-18 season. Saskatchewan finished with a 17-3 record and were second in RPI at .6366. The Huskies defeated the Winnipeg Wesmen in a best-of-three quarter-final, and the Trinity Western Spartans in a best-of-three semifinal.

Despite a slow start, the Rouge et Or quickly found its bearings, finishing at the top of the RSEQ university league standings for a second year in a row with a 12-4 record. Three of the five starters who contributed to the silver medal won at the U SPORTS Championship last year were back in the lineup, including fifth-year forward Raphaëlle Côté, a member of the conference's first All-Star Team .For the second year in a row, the Rouge et Or deserves its spot at the national championship as the wild card team, having been defeated by the McGill Martlets in the RSEQ championship in a rematch of last year's U SPORTS final. Laval is participating in the national tournament for the 20th time in its history.

The Calgary Dinos have used their depth, experience, and a stifling team defence to return to the Final 8 for the first time since making back-to-back appearances in 2012 and 2013. Their most recent appearance in 2013 was also in Regina and also featured a quarter-final match-up against Carleton, which they won 59-51.

That was Damian Jennings’ first season as the Dinos’ head coach, and now in his sixth year the team he returns to Regina has his stamp fully on it, led by fifth-year Brianna Ghali, the Canada West Sylvia Sweeney Award winner. Ghali led the team in scoring and rebounding, with fellow senior Shannon Hatch just behind her in both categories.

The Dinos led Canada West by allowing just 56.4 points per game, earning them a 15-5 record and edging out Victoria for the first-round playoff bye. Calgary blew past the Vikes in the first round of the playoffs before dropping two tight games to Regina in the semifinal on the road. Calgary punched its ticket back to Regina with a 65-63 win over Trinity Western in the Canada West bronze medal game, earning a spot at theU SPORTS Final 8 for the 15th time in program history.