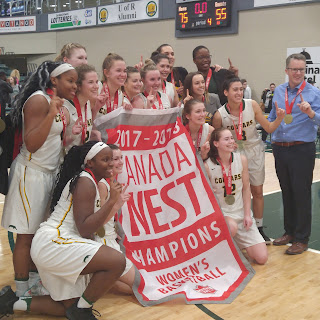 The University of Regina's women's basketball team will open up the 2018 U SPORTS Championship at the Centre for Kinesiology, Health & Sport with a quarterfinal matchup against wildcard recipient Laval, as seedings for the eight-team national tournament in Regina were announced on Sunday evening.

"Though we've played five of the other seven teams this year, Laval isn't one of them so there's certainly some unfamiliarity there," Cougars head coach Dave Taylor said. "They were national silver medalists last year and bring nearly all of their key players back, so they'll be an extremely tough opponent. The Quebec league was the toughest in the country from top to bottom, and Laval finishing first in the regular season demonstrates how talented they are. Coach Giroux has done an outstanding job with the Rouge et Or in his brief time there and I'm looking forward to matching up with them."

The Cougars are coming off their third Canada West championship in program history after defeating Saskatchewan on Friday night, while Laval lost to McGill in the RSEQ title game but were awarded the tournament's wildcard berth.

Carleton opened up the season with non-conference losses to both Regina and Alberta, but ended up as the No. 1 seed in the tournament after winning their next 33 games against U SPORTS opposition including the OUA championship on Saturday over McMaster. They'll open up the tournament on Thursday afternoon (1:00) against No. 8 seed Calgary, which got into the tournament on Saturday night with a road victory over Trinity Western in the Canada West third-place game.

McGill and McMaster were awarded the No. 4 and No. 5 seeds, respectively, and will square off on Thursday afternoon (3:00). McGill won the RSEQ championship over Laval, while McMaster lost out in the OUA finals to top-seeded Carleton.

The final quarterfinal will pit No. 3-seeded Acadia and No. 6 seed Saskatchewan. Acadia defeated the University of Prince Edward Island on Sunday morning to win the AUS championship, while Saskatchewan clinched a berth to the tournament last weekend and finished as the runner-up in the Canada West postseason. Acadia and Saskatchewan will square off at 8:00 on Thursday night.

Tickets for the tournament are on sale at www.reginacougars.com.