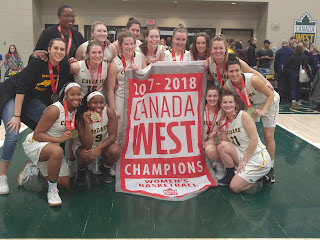 The University of Regina’s women’s basketball team pulled away from the Saskatchewan Huskies on Friday night, claiming the Canada West championship with a 75-55 win at an electric Centre for Kinesiology, Health & Sport.


It’s the third Canada West title in program history for the Cougars, who also won the conference banner in 2004 and 2013.

Friday’s game saw the Cougars land the first punch of the game with a big 12-0 run in the final four minutes of the first half that gave them a 41-29 lead at halftime. Regina led by double digits the rest of the way, and the Cougars scoring seven points in a 16-second span midway through the third quarter gave them complete control of the contest.

“I was extremely happy with how we performed tonight,” Cougars head coach Dave Taylor said. “Obviously Saskatchewan losing Libby Epoch this week hurt them, but I thought we did a good job of taking advantage. I thought all week if we got up more shots than them, it would give us a good chance to win and that’s what happened tonight.”

Kyanna Giles had a game-high 18 points for the Cougars, 15 of which came in the first half alone. Carolina Goncalves added 16 points off the bench, while Charlotte Kot finished with 14 points. Giles also had a team-leading seven rebounds, with Sara Hubenig adding seven points, a game-high six assists, and five rebounds.

Sabine Dukate led Saskatchewan with 12 points. Summer Masikewich fell just short of a double-double, finishing with 10 points and nine rebounds for the Huskies.

Neither team shot particularly well on Friday, with the Cougars shooting 33% from the field and Saskatchewan ending up at 31% for the game. Regina’s 21-12 advantage in offensive rebounding gave the Cougars a 17-9 edge in second-chance points, and the Cougars also had 20 points off turnovers to Saskatchewan’s 8. Much to Taylor’s approval, Regina hoisted 72 shots compared to 58 for the Huskies.

Both teams will be right back at the CKHS next weekend for the 2018 U SPORTS Championship. Regina, Saskatchewan, Carleton, and McMaster have locked up four of the eight berths with the other four to be decided on Saturday and Sunday. All four of the tournament’s quarterfinals will be played on Thursday.

NOTES: Friday’s game marked the third consecutive year that Regina and Saskatchewan have faced off for the Canada West championship ... both the 2016 and 2017 editions of the conference championship game were played in Saskatoon ... the announced attendance at the CKHS for the title game was 1814.
(Braden Konschuh/U of R Athletics)
at 3/02/2018


If Gonsalves and the sisters stick around, there could be a few more celebrations like last night.


Very happy for Dave. He deserved that one!