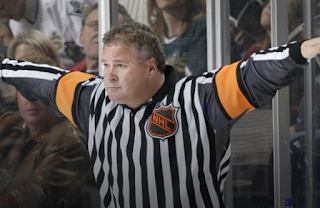 The family of former NHL referee Michael "Mick" McGeough  says he will be taken off life support.

McGeough was taken to a Regina hospital Sunday with the early signs of a stroke, and his condition worsened while waiting for tests. He met with a neurosurgeon in Saskatoon to see if clots in the back of his brain could be removed. Unfortunately, the damage caused by the stroke was irreversible.

The 62-year-old is back in Regina to be with his family.

McGeough officiated 1,083 games during his career and another 63 playoff games, including the 2006 Stanley Cup Final between the Edmonton Oilers and Carolina Hurricanes.

A GoFund me page has been set up.


Saw Mick at the rink last month. He looked great. Was talking about heading to Arizona to spend the winter.