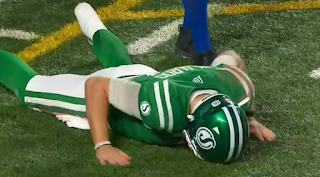 The Saskatchewan Roughriders season is over

In front of a sold-out crowd at Mosaic Stadium Sunday afternoon, the Riders lost 20-13 to Winnipeg.

On the last play of the game from the 8, Cody Fajardo, who played the game with two torn oblique muscles, saw his third down pass hit the crossbar and fell incomplete to preserve the Winnipeg win much to his disbelief.

“It’s a pretty sick feeling in my stomach.” Fajardo said. “Just for the fact that the play didn’t get a chance to play out because it hit the crossbar. I felt like we had a guy open, but as an offense we didn’t deserve to win that game.  We got inside the five I believe three times and couldn’t score a touchdown.  When you play like that, you don’t deserve to win.

The final trip inside the five ended when Fajardo was stuffed at the one yard line on a third down play with two minutes to play.

Head Coach Craig Dickenson says he and the squad were just numb over what had transpired.

“Give credit to Winnipeg because they did what they had to win.” Dickenson said. “That room is hurting right now because we felt like we played good enough to win.  It’s tough to put this one into words right now.”

Safety Mike Edem did his best to try and get the words out, but it was tough as he was very emotional fighting back tears as he spoke just moments after the final gun.

“Man, we worked too hard to have it end like this. “Edem said. “We lost two games to start the season and everyone started to write us off. The GM kept us together and we were able to put W’s together.  To get to this point and not finish off, it’s tough man.  We missed an opportunity to go to the Grey Cup. We let our fans down, we let the organization down.”

With 2020 comes the expectation of trying to do what the team did in 2013 which is win the Grey Cup in their own stadium. Fajardo had this message for the fans as the off-season begins

“Stay with us. I know it’s tough now but the future looks bright and I’m excited to be a part of this organization.”

The Bombers will meet Hamilton in next Sunday’s Grey Cup.

William Powell only gets 11 touches running and receiving? Give me a break.
The man calling the plays has to go.
McAdoo's contract is expired and Chris Jones isn't here to re-sign him so let him go.