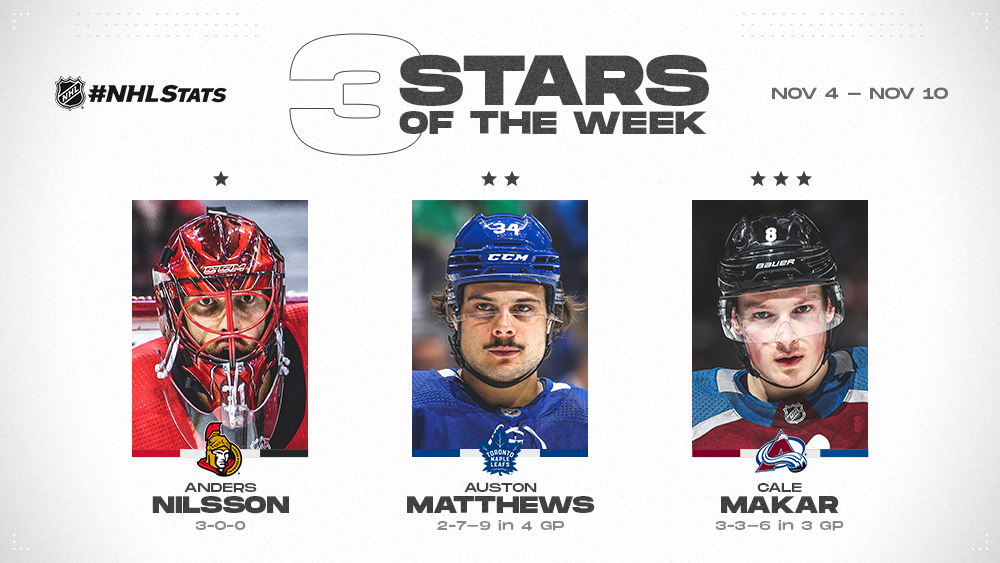 Nilsson stopped 96 of the 101 shots he faced, compiling a 3-0-0 record, 1.64 goals-against average and .950 save percentage to backstop the Ottawa Senators (6-9-1, 13 points) to wins in each of his three starts. Nilsson turned aside 32 shots in a 6-2 triumph over the New York Rangers Nov. 4. He then made 26 saves in a 3-2 overtime win over the Los Angeles Kings Nov. 7 and capped his week with 38 stops in a 4-1 victory over the Carolina Hurricanes Nov. 9. The 29-year-old Lulea, Sweden, native has played in eight total games this season with a 4-3-1 record and ranks tied for sixth in the NHL with a .930 save percentage.

Matthews factored on nine of his team’s 11 goals last week, leading all NHL skaters with 2-7—9 in four appearances to help the Toronto Maple Leafs (9-6-4, 22 points) to a 2-1-1 record. Matthews opened the week with 1-1—2, including the game winner, in a 3-1 triumph over the Los Angeles Kings Nov. 5 and scored the game-tying goal in the third period of a 2-1 overtime win over the Vegas Golden Knights Nov. 7. He closed the week with a pair of helpers in a 3-2 shootout loss to the Philadelphia Flyers Nov. 9 and a career-high four assists in a 5-4 loss to the Chicago Blackhawks on Nov. 10. The 22-year-old forward from Scottsdale, Ariz., ranks tied for third in the NHL with 13 goals this season and sixth in points (13-12—25 in 19 GP).

Makar tied for the NHL lead among defensemen in goals and points last week with 3-3—6 in three contests to propel the Colorado Avalanche (10-5-2, 22 points) to a pair of wins in three outings. Makar opened the week with an assist in a 4-1 loss to the Dallas Stars Nov. 5. He then put up back-to-back multi-point outings with a career-high three points (1-2—3) in a 9-4 victory over the Nashville Predators Nov. 7 and his first multi-goal performance – including the game-winning tally – in a 4-2 triumph over the Columbus Blue Jackets Nov. 9. The 21-year-old Calgary, Alta., native leads all rookie skaters in assists and points with 4-13—17 in 17 contests to become the fourth defenseman in NHL history and second in the modern era (since 1943-44) to collect at least 17 points through his first 17 career regular-season games.
at 11/11/2019