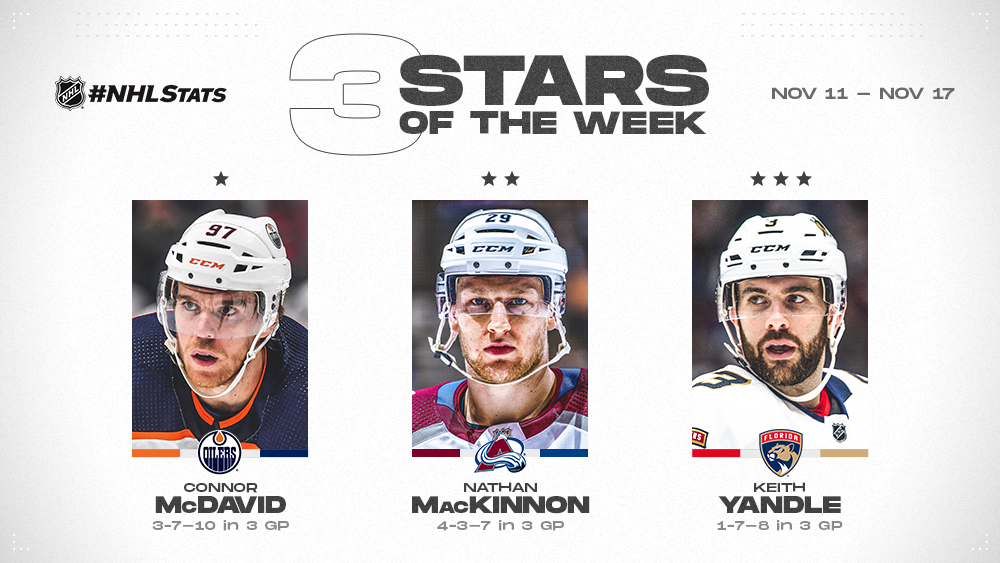 McDavid led all skaters with 3-7—10 in three appearances last week for the Pacific Division-leading Edmonton Oilers (13-6-3, 29 points). He opened the week with one assist in a 6-3 loss to the San Jose Sharks Nov. 12. McDavid then recorded a career-high six points (3-3—6), including his sixth career hat trick, in a 6-2 win over the Colorado Avalanche Nov. 14. In doing so, McDavid became the first Oilers skater to record six or more points in a game since Sam Gagner on Feb. 2, 2012 (4-4—8). He closed the week with a three-assist performance in a 5-4 overtime loss to the Dallas Stars Nov. 16. The 22-year-old Richmond Hill, Ont., native ranks second in the League with 14-26—40 in 22 games, trailing only teammate Leon Draisaitl (16-27—43 in 22 GP), and has been held pointless in just five of 22 appearances this season.


MacKinnon ranked tied for second in goals last week while leading the Colorado Avalanche (12-6-2, 26 points), who rank second in the Central Division standings, with 4-3—7 in three appearances. He factored on all four Avalanche goals with 2-2—4 in a 4-0 triumph over the Winnipeg Jets Nov. 12 before being held off the scoresheet in a 6-2 loss to the Edmonton Oilers Nov. 14. He finished the week with 2-1—3, including the overtime winner, in a 5-4 victory over the Vancouver Canucks Nov. 16. The 24-year-old Halifax, N.S., native leads all Avalanche skaters and ranks sixth in the League with 13-16—29 in 20 games this season.


Yandle recorded multiple points in each of his three appearances last week to lead all defensemen and rank third in the League with 1-7—8 while helping the Florida Panthers (10-5-5, 25 points) to a pair of wins in three contests. Yandle opened the week with three points (1-2—3) – all in the final frame – to help the Panthers rally from a 4-0 third-period deficit to defeat the Atlantic Division-leading Boston Bruins 5-4 in a shootout on Nov. 12. It marked just the ninth time in NHL history a visiting team rallied from a four-goal third-period deficit to win. He then recorded a pair of assists in a 4-3 loss to the Winnipeg Jets Nov. 14 and three helpers in a 4-3 victory over the New York Rangers Nov. 16. The 33-year-old Boston, Mass., native ranks sixth among blueliners with 2-16—18 in 20 games this season and has appeared in 817 consecutive regular-season games – the longest active “ironman” streak and the fifth longest in NHL history.
at 11/18/2019