Riders Are Confident Cody Will Play 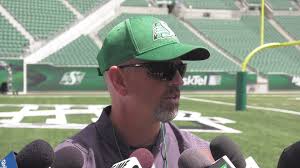 Fajardo missed Saskatchewan's 23-13 home win over Edmonton on Nov. 2 with an oblique injury. He returned to practice Wednesday, but was limited to a handful of throws near the end.

Dickenson said Fajardo was still easing back into action Thursday, but should be ready to go when the Roughriders host the Winnipeg Blue Bombers with a Grey Cup berth on the line.

"Cody looked all right. We had him do limited stuff, but he was able to throw with the team and move around well," Dickenson said. "So we'll look at the film to get a better idea, but all signs pointing that he's going to be good to go."

"I think he's going to have enough in the tank to throw a deep route," he added. "We'll have to see how he feels but he certainly looked like he was able to do what he needed to do to help the offence move the ball.

"Today was going to be kind of a test day for him, and so far he's passed the test."

If Fajardo can't play Sunday, the Roughriders will likely turn to Isaac Harker. The rookie went the distance in Saskatchewan's regular-season finale, completing 23-of-28 passes for 213 yards as the Riders (13-5) cemented top spot in the West Division for the first time since '09 with a win over Edmonton.

Dickenson said that even if Fajardo — the CFL's leading passer with 4,302 yards — is relegated to holding the clipboard, he expects the third-year pivot to bring a steadying influence to the sidelines.

"He still brings an element of calmness and professionalism and coolness to the team, where things don't rattle him to much. So he helps us that way even when he's not playing," Dickenson said.

Regardless of who is under centre, Dickenson said he wants to get Saskatchewan's ground game going. He admits that will be a challenge against the Blue Bombers' run defence.

"They do a good job of forcing you into second and long, and when you do that it's hard to run for first downs," he said.

Receiver Shaq Evans also practised Thursday after suffering a toe injury in the season finale. Dickenson said Evans would be a game-time decision for the West final.

A favourite target of Fajardo, Evans racked up 72 receptions for 1,334 yards and five touchdowns this season.

The Bombers advanced to the West final with a 35-14 upset of Calgary in last week's division semifinal. The Roughriders and Bombers are bitter rivals and Winnipeg running back Andrew Harris expects a charged atmosphere at Mosaic Stadium on Sunday.

"It's gonna be nuts. We all know how passionate those fans are," Harris said after Winnipeg's practice on Wednesday. "We're in their way right now to go into a Grey Cup so it's gonna be absolutely chaos in there, but that excites me and I know it excites the guys in this locker room.

"There's no better feeling that going into an atmosphere like that and shutting up their fans and coming out with a W, so that's the goal."
at 11/14/2019