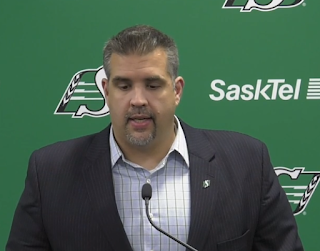 Just over a week after a tough loss in the Western Final to the eventual Grey Cup champions, Riders GM Jeremy O'Day discussed 2019 while looking forward to what will be a challenging 2020 as the green-and-white try to duplicate or exceed their 13-5 record.  Not only will they be trying to do that, but they will be trying to do what the 2013 Riders accomplished which is win the Grey Cup on their home field.

Winning the Grey Cup or at least being in the game was something the Riders thought would happen, but the Bombers had other ideas winning the Western Final 20-13 to end Saskatchewan's season for the second straight time at home in a playoff game as they added that win to their 2018 Western Semi-Final victory.

O'Day admitted Wednesday the loss in the Western Final is one that will linger through the cold Saskatchewan winter.

“It’s not something that goes away real quick. The sting is still fresh when you lose and you’re so close. O’Day said. “We were in line to make a good run at it but once the regular season is over, it’s only how you play in the playoffs,  and unfortunately we couldn’t get past that first game.”

As he looks to 2020, O'Day knows he has a job in front of him with many free agents to try and re-sign.  He says both he and Craig Dickenson have devised a strategy as to what players they want to retain and what ones they don't.

"I don't think we have any more or any less than most teams in the CFL, as most people understand with one-year contracts, you're going to be dealing with that on a regular basis moving forward," O'Day said. "Both pros and cons to those one-year contracts; you'll have a lot of guys that you have to renegotiate with in the off-season but you also have flexibility to change your roster if you need to."

O'Day said his strategy doesn't change just because the Riders are  hosting the 2020 Grey Cup.

"I would say over and over again that if you are planning any differently because you're hosting a Grey Cup, I would say that's not the right approach in my opinion," O'Day said. "I think you approach every year like you want to win the Grey Cup that year.