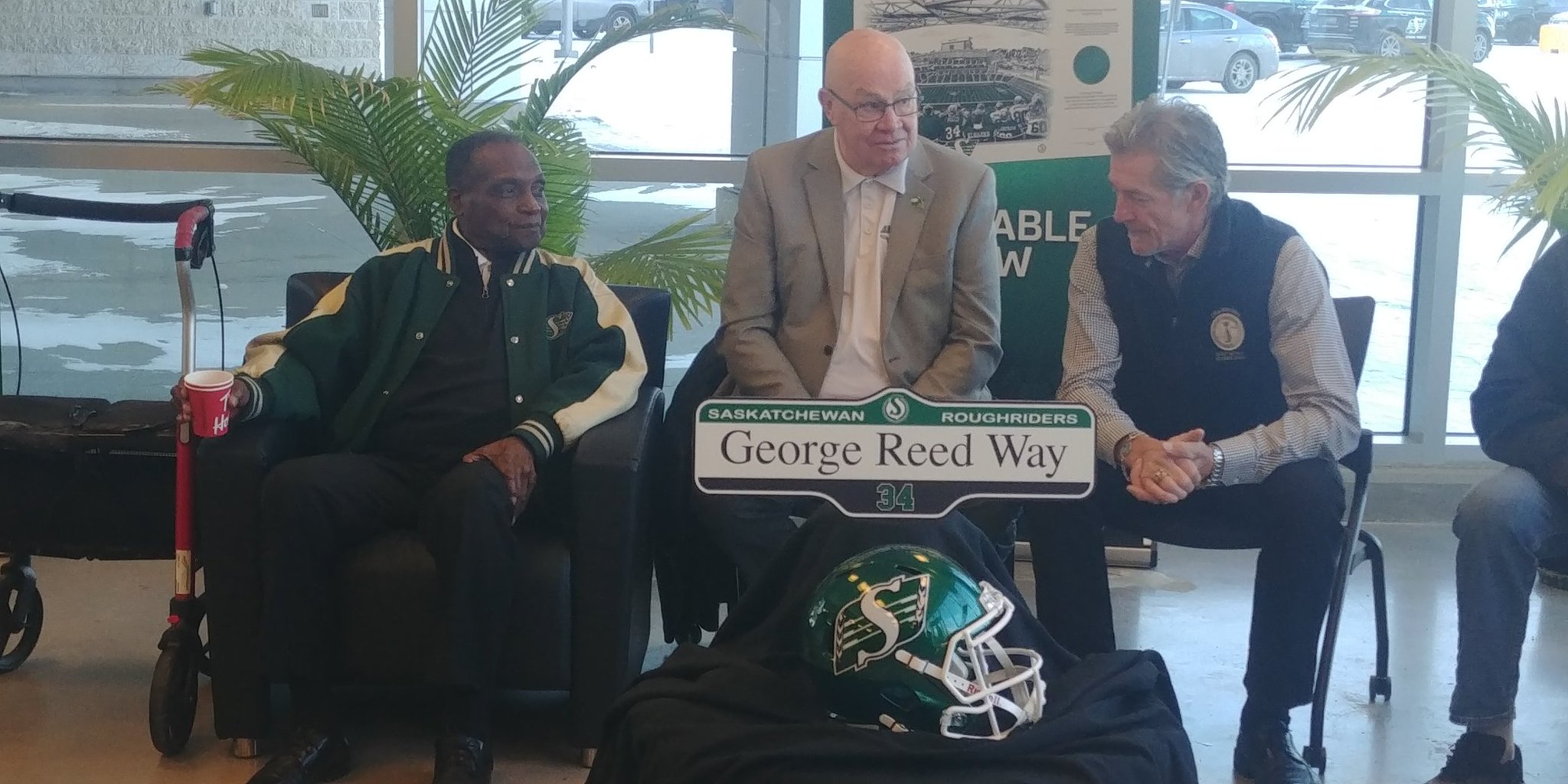 
The Saskatchewan Roughriders alongside the City of Regina and the Regina Exhibition Association Limited (REAL) are pleased to announce a section of 10th Avenue will be renamed to honour Roughrider legend George Reed.

George Reed Way will begin at Elphinstone Street and run west down along the stadium to Crescent Point Energy Gate 2. In addition to the street being named after Reed, the new address of Mosaic Stadium will be 1734 George Reed Way in a kismet nod to Reed’s jersey number.

“George Reed is a living legend and such an important part of the Roughriders past and present,” said Saskatchewan Roughrider President and CEO Craig Reynolds. “We wanted to find a way to honour George, not only for his commitment to the team and his excellence on the field but for all of the inspiring work he’s done for the community. With Mosaic Stadium now residing on newly minted George Reed Way, we believe we’re giving back to George just a fraction of what he’s given Saskatchewan.”

Since the opening of Mosaic Stadium in 2017, the Club has dreamt of the possibility of naming the street in front of their new home after Reed.  When the Roughriders approached the City of Regina and REAL with the potential name change several months ago, both the City and REAL worked eagerly with the team to make this dream a reality.

“As the owner of Mosaic Stadium, the City recognizes and appreciates the legacy that the Roughriders and Mr. Reed have created,” said Mayor Michael Fougere. “Every time a minor sport athlete travels George Reed Way to play or watch a game at the stadium they will be reminded that greatness is within their grasp. That is a powerful message for young people in our community.”
“We are thrilled that the Saskatchewan Roughriders, a team with such a storied history and devoted fan base, call the Evraz Place campus home,” said Tim Reid, President and CEO of Regina Exhibition Association Limited. “George Reed Way is a fantastic addition to our property, and we are extremely proud that residents and visitors will experience a piece of our province’s rich football tradition each time they come to our campus.”

Reed, who just turned 80 in October, is known as one of the greatest running backs in Canadian Football League history. He had an incredible 13-year professional football career with the Saskatchewan Roughrider and retired as the game’s all-time leading rusher with 16,116 yards and a record of 134 career rushing touchdowns that still stands today. He was a key part of the 1966 Grey Cup Championship where he rushed for 133 yards and a touchdown and was named the MVP.

Reed’s number 34 jersey is one of just eight numbers that has been retired by the Club.

Off the field, Reed jumped in the Saskatchewan Community headfirst creating the George Reed Foundation which focuses on helping the physically and intellectually disabled and the disadvantaged. Reed is also a long-time supporter of Saskatchewan Special Olympics.


This should have been done the day the stadium opened.


The honour is tremendous, but I can't be the only one wondering why Ron Lancaster hasn't been recognized in some fashion. If George is to be recognized, why not Ronnie?