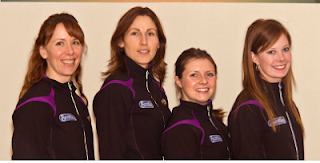 Congratulations to Jill Shumay's rink from Maidstone. They won the provincial Scotties womens curling championship beating Amber Holland and Stefanie Lawton Sunday to take the crown in Balgonie. On Wednesday night, Shumay beat defending champ Michelle Englot and she was asked if   that was an upset. She didn't get mad, but she reminded people that it wasn't and that she finished 3rd last year. In a province where there are so many great teams, no one thinks of the Shumay rink and she flew under the radar in Balgonie. She was the best rink on Sunday and her post-game interview with Arielle Zerr on Access when it was over was great because the raw emotion of what had just happened came through. I love that part of sports.

Once again, the guys at Access did a great job in covering the curling live. That's no easy feat and its no easier when they ask some idjit like me to do play-by-play. All in all, it was good day in Balgonie and it may have been a prosperous one. I need to find out the 50-50 number because I think I had the last three numbers. I just don't if I had the first four or the right coloured ticket.


The U of R’s Lindsay Ledingham made me feel old on Saturday night. Ledingham became the 10th player in the history of the womens basketball program to score 1000 points. Talk started on other players that have cracked that 1000 point plateau. I knew of a couple, but I got home and looked at the Cougar record book and saw the names. I remember most of those players playing and doing their games on Access.  Names like Jana Schweitzer, Trena Mott and Bree Burgess.  Yup, I’ve seen me a lot of Cougar basketball over the years in the Christine Stapleton, Jeff Speedy and Dave Taylor eras and I remember many of the great ones that have worn the uniform.

I've said it once on this blog and I will say it again. The Cougar basketball teams are very entertaining to watch. The women are fast and talented and while the mens team isn't going to be confused for a CIS champ this year, they are competitive and they can pull out some big wins as Saturday's one point victory over Alberta would attest. Its a cheap night out and its good basketball.


Everywhere I went this weekend, people wanted to know about my thoughts on the Geroy Simon deal. Say what you will about what the Riders have done over the past couple of months, they are generating a lot of talk and that is just what the team wants. I don’t think its close to being over yet.  Speaking of Geroy, he will be on the Sportscage with yours truly on Monday night. He’ll be on around 630.


There are some that don’t think Geroy should wear 81 here because it was worn by Ray Elgaard. This just in…if the Riders are going to let guys like Freddie Barnes and Terrence Jeffers-Harris wear that number, they will let Geroy wear it. Should Barnes, Jeffers-Harris and others have worn 81 after Elgaard wore it?  Lets just say that’s another topic for another time.


When Corey Chamblin says he met Joe Lobendahn for the first time, he scared him. I wonder what Corey would think if he ever met Ray Lewis. For that matter, I wonder if Corey played against Ray Lewis. I will have to ask him that.


One Rider fan told me this week he can’t wait till June. I told him I can’t either, but my reason is it will be a helluva lot warmer than it is now. I know Environment Canada told us at CKRM back in early January that we were in the middle of one of the snowiest, coldest winters that we’ve had in a long time.  It will make spring feel that much better although I hope this snow doesn’t mean a repeat of the heavy floods that southern Saskatchewan and North Dakota had to endure a couple of  years ago.


The casino ad where the couple is in the restaurant and she breaks up with him in the way you would at a Montana’s or an Applebees when its your birthday is outstanding. They are a thousand times better than the lame Tim Hortons ads that you see. Perhaps Tims needs to find a new advertising agency.


Regina radio lost a major talent this week as Seanna Jefferson gave up her post at the WOLF to take a job at the BEAR in Edmonton. Seanna was “unique” in her ways and if you listened to her, you know what I mean.  I hope the Alberta capital is ready for “Pantless Thursdays” and whatever else is cooking up in that mind of hers. She will knock Edmonton on its ass and as I wrote on her goodbye card, she will probably become Mrs. Jordan Eberle.


The Oilers are close to having a 700 million dollar stadium built. 700 million! That makes our 278 million dollar facility look piddly dont’cha think. Is each seat going to be lined with gold. It will do for Edmonton what other new rinks and buildings have done and that is make the city better.


Those against the stadium in Regina are upset with the city’s plan to close some pools saying they won’t find the money to keep them open, but they will find the money to build a stadium. This just in-----pools won’t do one ounce of good when it comes to money and other benefits that will come pouring in from the new facility at Evraz Place. Losing a couple of pools means nothing to me. Yes, I understand to some that is a big deal, but in the end, a pool and its benefits doesn’t even come close to the positives that the new facility will bring.


If the SJHL wants to re-align and create new divisions that’s fine, but not having Humboldt in the same division as Melfort and Nipawin and not having Notre Dame in the same division as Weyburn and Estevan doesn’t make sense to me. I thought the current divisional format was fine and so did some of the coaches in reading Ian Hamilton’s Saturday story in the Leader-Post  Hopefully they can get everyone on the same page and make that league what it used to be.


Why is it in the NHL a guy gets crushed by a good hit and moments later the guy that delivered the hit has to drop the mitts because someone comes in to “protect” the player that has been hit? Someone needs to give me a valid explanation as to why this occurs.  The NHL really needs to crack down on this.  Kicking the guy out and giving him a one game suspension would be a good start.


There is only one thing wrong with Jack Keaton’s. That is its in the northwest end where my travels don’t take me very often. They took me up there Saturday and I stopped in knowing when I left that I would be full and extremely satisfied. Lets just say I was right. Their chow is simply outstanding.


Speaking of restaurants, a friend of mine had told me I had to try this little place on Broad Street called “Brownbag Deli” because they made homemade soups and sandwiches. I checked it out last week since it’s a hop, skip and a jump from Harvard headquarters and it met up to expectations. I find out Saturday night that Friday was their last day of business and that they are moving elsewhere. SIGHHHHHHHH!!!!


The Pats need wins and lots of them as they start the final third of their season. I hope they can make a serious playoff push in the final 22 games, but they are running out of time. I hate to say it, but they may be on the outside looking in again come playoff time. I really thought they would be a lot better this year, but those injuries they suffered in the first half of the season is something that looks as if it could be the knockout punch. Its not over till its over though and I’m sure Pat Conacher will have his guys working hard for as long as they are still in contention and then some.


Rumour has it High Impact Wrestling doofus-extraordinaire Rex Roberts will be appearing on a future “Locker-Talk” to promote the February card.  Hey, I didn’t say all Locker-Talks were good ones.  Perhaps I’ll ask the dumb cowboy how many ceiling tiles there are on the roof of the Victoria Club since he’s counting them a lot of times when he is laying on his back getting the three-count.  Is there no one better to promote the show? Oh well, I guess you gotta take the good with the bad. Maybe Rex should go on “The Lamb of Love”! Speaking of Access, I was asked if I knew the whereabouts of comical duo James and Kevin who made themselves famous thanks to Access. I think James is still in Regina, but I have no idea where Kevin Allardyce is these days. Do you?  Those guys were funny! Can we get a reunion tour or show from them?

Head to Buck's Bar and Grill just outside of Humboldt in St. Gregor best wings/food and service ever!If you're back in the area you won't be disappointed!

I would much rather spend my $$ on Cougar basketball than Pats hockey. Better product and a way better time.

The Pats are done!

Good point on the pools. Some people just don't understand.

Re-aligning divisions in the SJ is a good move, but not putting Notre Dame with Weyburn or Humboldt with Melfort is dumb.

Well done Jill and your rink. Lay the boots 2 Jenn Jones from Manitoba

The Pats are boring to watch. i think its time for Parker to sell the team and leave town. Its not the coaching or the GM to blame. For years a lot of coaches have come and gone with the same result. Not making the playoffs or losing in the first round. Time for new ownership.

To the "genius" who asks about 278 million being piddly. It is when you compare it to 700 million. DO THE MATH!!

In regards to SJHL re-alignment, if they want go to 3 divisions I'm not sure how you could do fairly for all teams. Yes the Hounds should be with Weyburn & Estevan. So should Kindersley be with NB. Geographicly 3 divisions doesn't seem to make sense for all teams. Maybe 4 divisions of 3 teams, or leave it the way it is & just swap Kindersley & Humboldt. Just a thought. Frankenstein