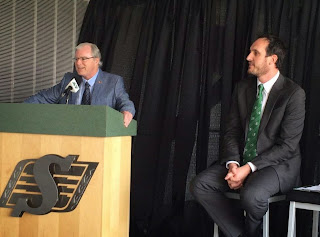 The 12 Founding Partners, known as The Starting 12 , will provide support to the Roughriders construction commitment of over $40 million towards the new Mosaic Stadium.

This select group of corporate partners receive lifelong recognition within the new facility and the ability to secure exclusive multi-year sponsorship and partnership assets, naming rights and other activation opportunities with our fans.

Founding Partners will also have access to premium hospitality areas, including suites and lounges that will provide an exclusive environment for building relationships with clients, vendors and preferred customers.

Our naming rights sponsorship of Mosaic Stadium represents our long term commitment to the province of Saskatchewan, said Walt Precourt, Senior Vice President Potash for The Mosaic Company, we are proud to help usher in an exciting new era for the Roughrider Football Club, the community and all of Rider Nation.

"Together with the Saskatchewan Roughriders, SaskTel s vision is to create a world-class technologically innovative facility and deliver the best fan experience possible for the hundreds of thousands of Saskatchewan people who visit the stadium annually," said Ron Styles, SaskTel President and CEO.

Harvard Broadcasting will continue to be the Roughriders exclusive radio broadcaster on the newly expanded 620 CKRM Rider Radio Network until the year 2031 under today's announcement. Combined with Harvard s Mobile Apps and Streaming options, Rider Nation can follow Game Day broadcasts of Canada s Team in all corners of the Province and anywhere in the world.

We are delighted to continue our relationship with the Saskatchewan Roughriders. This new agreement will mark 49 years of Harvard s broadcast partnership with the Football Club, but moreover, it will be the culmination of 49 years of support and dedication to the Riders by The Hill Companies and the Hill Family, stated Paul Hill, Chairman, President and CEO of The Hill Companies. That support has taken many forms, highlighted by initiatives such as the Television and Radio-thons (1987&1997), Save the Turf campaigns (2000 & 2007), Jersey Auction (1989), East & West Side Club Seating builds, Centennial Fund & Camera Tower build (2005), Rider Shares, Major Sponsorships of the 1995, 2003, and 2013 Grey Cups, plus ongoing support of the Plaza of Honor Dinner and Friends of the Rider s Lottery.

Capital Auto is proud to be one of the founding partners of new Mosaic Stadium, as well as to be the exclusive vehicle supplier to the Saskatchewan Roughrider Football Club, stated Capital Automotive Group President & CEO, Bruce Axelson. The staff of the Capital Automotive Group are honored to be part of this new venture in support of the City of Regina, province of Saskatchewan and the Roughrider Football Cub for many years to come.

What a great day!

This means CJME can take their Green Zone and just close the doors.


If you have rights from now until forever, please get all and any technical problems fixed. Thanks!

I have grown up listening to CKRM and now my kids will as well. This is great news! If the old Scruffster can just get more of a sports presence over there, it will be great! #cagecohost

I wish I could see the reaction of some of the slime we used to call co-workers.

I am sure they are trying to rationalize this to staff by putting some extra goodies in the Kool-Aid today!

Remember what everyone told you in the days following your departure---ITS THE BEST THING THAT COULD HAVE HAPPENED TO YOU!!

Sasktel is government so them stepping up to the plate isn't a surprise as we all knew one of the crowns would step up.

It is great to see Bruce and the gang at Capital and Mosaic to join Harvard in this initiative.

I am guessing Viterra and Brandt will soon be hopping on board in some fashion very soon.

Himpe saw it coming and went and quit the station 2 weeks ago.

Anonymous said...
This comment has been removed by a blog administrator.
5/25/2015

Get it straight! Himpe didn't leave. Someone over there finally smartened up and fired his snivelling ass. Couldn't have happened to a better person and I am sure Mitch agrees with me.

People in that building are better off knowing he is no longer a part of their equation. May he never be heard from again!!

Anonymous said...
This comment has been removed by a blog administrator.
5/25/2015