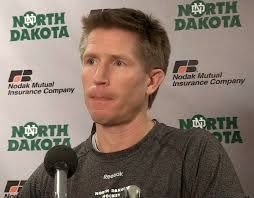 Dave Hakstol was hired by the Philadelphia Flyers on Monday, becoming the 19th head coach in the franchise's history.

Hakstol, 46, has been the University of North Dakota's head coach for the past 11 seasons. At North Dakota he had a 289-143-43 record and led the school to the NCAA tournament in each of his 11 seasons. Last season, the school was 29-10-3 and advanced to the Frozen Four for the seventh time during Hakstol's tenure.

Dave brings a wealth of head coaching experience and success to the Philadelphia Flyers organization," general manager Ron Hextall said in a statement announcing the move. "He's a proven winner and we are pleased to have him become part of the Flyers family."

He replaces Craig Berube, who was fired after two seasons. Philadelphia was 33-31-18 this season and missed the playoffs.

Hakstol resigned as North Dakota's coach Monday before accepting the Flyers' job. The school said a search for his replacement is underway.

"We will seek the best coach for the best men's hockey program in the country as expeditiously as possible," athletic director Brian Faison said in a statement. "I want to thank Dave for the tremendous job he did in leading the men's hockey program at North Dakota. While the numbers speak to his teams' many successes on the ice, just as important is the impact he and his staff have had on the student-athletes who have played for him."