Lions Say Travis Lulay Will Be Ready For Training Camp 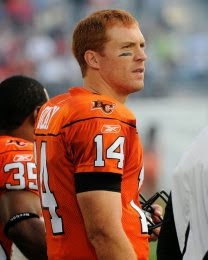 The B.C. Lions expect veteran quarterback Travis Lulay to be a full participant on Day 1 of training camp.
The 31-year-old has been plagued by injuries to his throwing shoulder over the last two seasons, but head coach Jeff Tedford said Friday that Lulay should be good to go when veterans report next weekend.
"He's very excited about his progress and about the upcoming season," Tedford said on a conference call. "We have to be smart with him of course, but he's a strong competitor. He has a great deal of admiration and respect from the people in this organization — his teammates, management, everyone in the building."
The 2011 Grey Cup MVP, Lulay originally hurt his right shoulder on a goal-line plunge back in September 2013. He returned for the Lions' playoff loss to the Saskatchewan Roughriders that year before opting for surgery.
The belief was he would be ready for last season's training camp, but the rehabilitation took much longer than anticipated and his only start of 2014 was cut short when he injured the same joint in Ottawa against the Redblacks on Sept. 5, basically undoing the surgery.

Lulay — who opted against another surgical procedure and has been rehabbing the injury by doing some unorthodox drills this off-season with Tedford's guidance — took part in the Lions' three-day passing camp at the end of last month.
"I think he gained a lot of confidence. It's a mindset," said Tedford, who was hired in December. "He's doing a lot of other things as far as playing the position besides just throwing the football. Doing things off-balance, doing things off-platform, falling on his shoulder. Doing all those things that can clear him of any mind clutter that may be there as you're overcoming the setbacks that he's had with his shoulder.
"I think he feels really good about where he is. We're going into the first day feeling like he's going to be ready."
The Lions' rookie camp opens Thursday in Kamloops, B.C., before the main camp gets underway May 31.

He is one shot away from being done!

Cortez better hope he stays healthy or he is in the same boat he was last year after Darian went down.

But how long will he last?