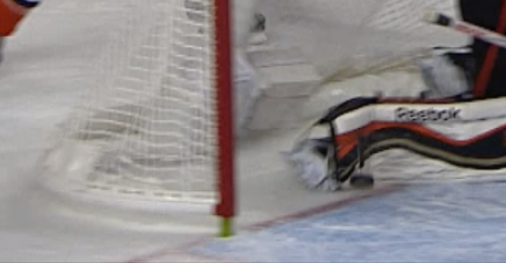 Colin Campbell has been in this situation before.
Not just as the man who oversees the NHL’s controversial video reviews but as a guy caught in the middle of a shockingly similar non-goal situation 11 years back.
“Same play, same end, same place as 2004,” said the NHL’s Senior Executive Vice-President of Hockey Operations, referring to Calgary Flames sniper Martin Gelinas’ non-goal against Tampa Bay Lightning goaltender Nikolai Khabibulin in Game 6 of the Stanley Cup Final.
“What’s different is we have post cameras in net and overheads in high definition we didn’t have back then.”
Alas, none of it helped make any difference on a call that ultimately went against the Flames again when Sam Bennett’s shot was kicked out by Anaheim Ducks netminder Frederik Andersen near the goal line late Tuesday.
And for those who are still seeing red because they thought they saw white between the puck and the goal line, it’s important to point out the league made the right call.
That won’t change the belief of biased fans who will see what they want to see and believe the team got jobbed once again by big bad Toronto.
But it’s a fact.
“I understand if you are passionate and you think it was in but we don't guess -- we have to have it conclusively,” Campbell told the Calgary Sun.
“We don't use ‘almost’ or ‘I assume’ or ‘I think.’ We have to use conclusivity. It all depends on the call on the ice, and we have to prove the obvious.”
Fans throwing around screen grabs of the apparent goal on social media all day Wednesday certainly thought the call should have been an obvious one: Overruling the non-call by officials who couldn’t possibly have been able to tell in real time it crossed the goal line to tie what was a 3-2 Ducks lead with 6:17 remaining.
Fact is, the puck was obscured by the crossbar from the overhead camera, the net camera was blocked out by the goalie, as was the post camera on Andersen’s left side. The right-side post camera isn’t designed to aim down enough to see the low shot.
The photo irate Flames fans are clinging to is from a broadcast camera high up in the stands, providing an angle that gives a deceiving view Campbell does well to put in perspective.
“It's like a horse race -- you can't stand ten feet ahead of the finish line and determine who won a close race -- you have to be standing along the finish line,” Campbell said.
“Also, don't forget this -- the goal line is painted one-and-a-half inches below the ice. So you can put the puck on the goal line and stand ten feet back and see white ice underneath it. The puck could also be in the air.”
That’s where most are being fooled into believing the video is conclusive.
It’s not.
None of this is to suggest the puck never crossed that plane. It just isn’t definitive, thereby preventing the war room from overturning the officials’ (non-)call.
“If the call on the ice was ‘good goal,’ then I couldn’t overrule it either,” added Campbell, who said the cameras aren’t to blame.
“We’ve been trying to achieve perfection. Maybe one day we'll have it 100% but it’s difficult. Hey, maybe the next one we use is a crossbar camera (shooting down at the goal line).”
Brilliant idea that likely would have ended a debate many can’t believe we are still having given all the technology out there that could surely avoid any such uncertainty.
Well aware of the controversy in ’04 that many believe cost Calgary the Stanley Cup, NHL Commissioner Gary Bettman had a chat with Campbell, too, regarding the goal.
“Even Gary is calling in, asking, ‘are you sure?’” said Campbell, who was in the league’s New York office when the play was being reviewed, speaking the entire time to Situation Room boss Mike Murphy.
“We show these kind of plays to managers all year and ask them if they want us to change our approach. If they want us to use the same technique as those in a bar in Calgary use then fine but if we had said ‘good goal,’ everyone in Anaheim would be upset. But I couldn’t walk down to tell Ken King, Brian Burke, Murray Edwards or one million NDP people in Calgary that it was in. It was inconclusive.”
Fortuitously for the league and the Flames, it was rendered a moot point five minutes later as Johnny Gaudreau got the league off the hook with 20 seconds left when he tied the game 3-3, setting up Calgary’s overtime winner.
“All we did last night was say, ‘Go Johnny Go,’” Campbell said with a laugh.
He was joking. Conclusively joking.

Whatever you say Colin!

I'll believe this load of crap when they tell me the NDP won the Alberta election. Wait a minute!!!!

The NHL lost a bunch of credibility over that call.

Totally off topic Scruffy but prior to a sporting event when they sing the National Anthem why do the athletes think they have a license to squirm around? The crowd is standing at attention, showing respect but not the players. The height of disrespect is PK Subban acting like he's in a disco. I find it disgusting.