The fight of the century is over and now one has to wonder if the "Rematch of the Century" will take place. If it does, someone let me know how it finishes.

The only positive I could take away from Mayweather-Pacquiao was that those who slapped a brown bill down to get the PPV at least got their money's worth as the fight went the distance, but that is a deep search to find a positive.

The twitterverse was pretty much as unanimous with their verdict of the fight as the judges were in favour of Floyd Mayweather and that is the fight was an overall dud.  Mike Tyson and Oscar De La Hoya even said the bout was bad for the sport and one would think those two guys would know.

I didn't expect it to be of Hagler-Hearns quality, but I thought it would be a lot better than it was. Who's kidding who---Kapp vs Mosca was better than that!

All I know is Regina boxing fans will get a better display of the sport at a much cheaper price if they go to the Ken Goff Boxing Classic featuring the Canadian and American national teams on May 22 at Evraz Place. 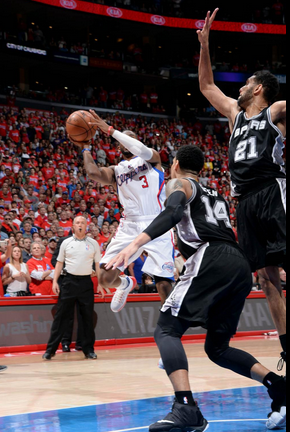 TNT's Kevin Harlan (one of the best in the biz) said it best in the final minutes of Game 7 of the first round NBA series between the L-A Clippers and the San Antonio Spurs when he uttered "I don't want this to end".  If it wasn't for Chris Paul making a circus shot (pictured above), it would have gone on at least 5 minutes longer. Paul's improbable shot found twine with one second left to give the Clippers a win over the defending NBA champs in what was one of the best 7 game series the NBA has ever seen.  The Spurs are the closest thing to a dynasty in professional sports these days and to beat them is an accomplishment, but there is still a long ways to go for the Clippers and the remaining teams in the NBA playoffs.

Stories out of Winnipeg suggest Drew Willy got 400-grand from the Bombers. 400-grand for a guy going into his 2nd year as QB and who hasn't won a playoff game or Grey Cup game is just downright stupid. Good for Drew though! I don't know what the future holds for him, but as I've said earlier, I don't see Winnipeg at this time even crawling to the same level that the Riders, Eskimos and Stampeders are at in 2015.

Question: George Cortez seemingly had no desire to develop either Tino Sunseri or Seth Doege once Darian Durant went down. Cortez is now in BC and won't he be in a similar spot if Travis Lulay goes down to injury again? I don't even know who BC has throwing the ball for them at training camp, but they don't have any veterans.

A University of Regina Rams fan asked me on the weekend how I think the team will fare with Mike Gibson at the helm. I DON"T KNOW!!! Does anyone? The team likely won't have Addison Richards or Tevaughn Campbell back which hurts, but who steps up? Noah Picton is learning a new offence, but he is smart enough that he should be able to grasp it. What do the other teams look like?  It is farrrrrrr too early to even start discussing that, but I would think the Rams should make the playoffs this year. Calgary can't be as strong as they have been so the conference could be wide open this year. Does that suggest Regina could take a run at first? It does, but I'm sure there are other teams out there who also believe that at this time. Lets wait for a few months OK? By the way, huge congrats to Tevaughn Campbell who has accepted an offer from the New York Giants to attend mini-camp.

The same could be said about the NFL draft as many "experts" proclaim winners and losers of the draft, but we won't know the answer to that question until guys go training camp and perform. On the surface, it would seem the Philadelphia Eagles lost as Chip Kelly's efforts to get Marcus Mariota failed, but did he really want his old college quarterback. One would think Kelly can't be too comfortable going into 2015 with the oft-injured Sam Bradford calling the shots. I was surprised to see Dallas not select a running back to make up for the loss of Demarco Murray and I was very surprised to see the amount of receivers Indianapolis took considering they need defensive guys. I like what Jacksonville did, and I think Green Bay got two players in receiver Ty Montgomery and quarterback Brett Hundley who one day could be special, but lets look back in 3-5 years to see who did well and who didn't in this draft. It really is the only way you can measure these things.

One month into the baseball season and it is evident that the Blue Jays can hit the baseball, but they have no one to throw the baseball effectively. That pitching staff is a mess from top to bottom.

Most everyone thought it would be Brandon and Kelowna in the WHL final and that is what is going to happen. Should be a good series and one in which I will take Kelowna to win it all.
---

It seems to me as if those Montreal Canadiens fans who were crowing after Game 3 of the Ottawa series have gotten awfully quiet in a big hurry.  They are in big-time trouble.
---

Who has looked better in the playoffs, the Blackhawks or the Ducks? If those two meet in the Western Conference final, strap yourself in for what should be a dandy.

Has Johnny Gaudreau been in the 2nd round against Anaheim? I am allowed to ask that seeing I have Johnny Hockey in one of my playoff drafts.

-----
I just find it dumb when teams pull their goalies with more than 90 seconds to play. It invariably leads to a two goal game being a three or four goal game at the end. Has that ploy ever worked? If it has, I don't remember.

Chicago has lost in the playoffs, Anaheim hasn't. This question is an easy one. How bout the play of Getzlaf? He has taken his game to the next level.

The "Silence is Deafening" - Love it!! ALL my Habs Fans relatives and friends seem to have lost my email address and my cell phone # in the last 4-5 days.

The fight wasn't great, but anyone who has seen Mayweather box before should have known that going in.

Watching MayPac with a friend who's into MMA and his comment..."this is like watching 2 guys fencing" made me wonder if boxing has became obsolete in the world of the sudden action, more contact made of Mixed Martial Arts.? 12 rounds of this wouldn't make me think I'd buy the rematch.
...(I would however hone my skills at Periscope where many people said they saw the entire fight FREE on this app. while reading twitter)

Who cares what you think!

The Blue Jays are simply atrocious. Why is Gibbons still there? Why is their pitching coach still there? Make some changes and get some pitchers.

I'm with Anon 1 when it comes to the fight

Hope you're right when it comes to Goff classic.

John Gibbons must go if the Jays are to have any success!

I went in thinking this fight would be a scam and I maintain it.

Did either guy really hit anyone.

FM danced around and did enough to earn talk for a rematch meaning more $$$$$ for each guy.

Professional boxing is the biggest sham going and this proves it.

Boxing nowadays is the same as the NHL. All defense! Boring.

I like your question about George Cortez. But I just can't help but wonder why you or any other member of the Regina media never had the guts to ask that question last year.
That's what I respect about Greg Zaun. He covers the Blue Jays yet he's not scared to question their moves or lack of them.

We did and were laughed at by George who said there was no such thing occurring.

Its called saving my skin 101

I guess I missed that news conference. I've never heard any media ever take a Rider staff member to task and if you'd get fired for doing so it's a pretty crappy organization. Where are we, Russia?