Neal Hughes Calls It A Career 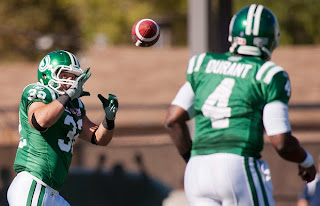 The Saskatchewan Roughriders announced today national fullback Neal Hughes is retiring from the Canadian Football League.
Hughes is a veteran of eleven CFL seasons and played 140 career regular season games after making his Rider debut July 16, 2004. The Regina, SK native was originally signed as a free agent in April, 2004 after a standout career at the University of Regina.
Spending the entirety of his career in Green and White, Hughes totaled 70 carries for 277 rushing yards and eight touchdowns while adding 46 catches for 505 receiving yards and six touchdowns. He also registered 18 kickoff returns for 246 yards, one punt return for 21 yards and is third all-time in Rider special teams tackles with 100.

Good Regina kid succeeding for the hometown team. Thanks for the career Hughsie!!

Retired a Champion, now onto ice-fishing.

Neil Hughes is a class act! May retirement suit him well!