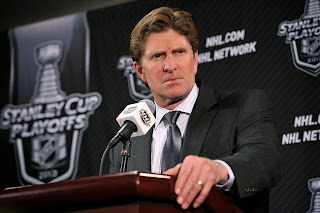 Brendan Shanahan, President and Alternate Governor of the Toronto Maple Leafs, announced today that Mike Babcock has been named the 30th head coach in the club’s history. Babcock, 52, joins the Leafs after serving as head coach of the Detroit Red Wings for the past 10 seasons.

Under his leadership in Detroit, Babcock posted a 458-223-105 regular season record as he became their franchise leader in games coached (786) and wins. In his time with the Red Wings, the club twice captured the Presidents’ Trophy as the NHL’s regular-season champion (2005-06 and 2007-08) and made the playoffs in each of his 10 seasons. In 2007-08, Babcock led the Red Wings to a Stanley Cup championship in just his third season with the team, securing his first NHL title and the 11th in team history. Babcock was named a finalist for the Jack Adams Award as the NHL’s Coach of the Year in 2008 and 2014.

Prior to joining the Red Wings, Babcock spent two seasons with the Mighty Ducks of Anaheim (2002-04), where in his first season as head coach he led the Ducks to their first appearance in the Stanley Cup Final. Throughout his tenure as an NHL head coach, Babcock has led his teams to the Stanley Cup Final three times and the Western Conference Finals four times.

Prior to stepping behind the bench in Anaheim, Babcock spent two seasons (2000-02) as head coach of the Cincinnati Mighty Ducks of the American Hockey League (AHL). He had moved to Cincinnati following a six-year run at the helm of the Spokane Chiefs of the Western Hockey League (1994-95 through 1999-2000).

In international play, Babcock has also represented Canada at several competitions. Most notably, he became the only coach in hockey history to lead his country to gold in consecutive Olympic appearances after guiding Canada in Vancouver (2010) and Sochi, Russia (2014). In 2004, he led Team Canada to a gold medal at the World Championships. In 1997, he took part in his first international coaching experience at the World Junior Championships as Canada also captured gold. Babcock is the only coach in the ‘Triple Gold Club,’ an exclusive group of individuals who have captured the three most prestigious championships in hockey (a World Championship, an Olympic Gold Medal and a Stanley Cup).

I can't think of a worse fate.

If it takes a guy from Saskatoon to get the job done in Toronto, hey go Leafs.

Typical Leaf move, if Babcock doesn't get the job done in 3 years he's gone and they are on the hook for 5 years of salary