What a weekend! If you didn't spend a majority of it outdoors, why not? Mother Nature certainly made it up to us after what was a pretty wet and cool long weekend.  The sticks came out for the first time and nothing has changed from last year. If I ever decide to get serious about the game, I will definitely work on everything from 150 yards in. It looks so easy on TV!! Bottom line was it was good to get back out on the links and swing away.

Good on the Montreal Alouettes for signing Michael Sam to a contract. I hope he is there to actually compete for a job and not as a stunt to sell tickets. Sam can play the game. He showed that in last year's NFL pre-season only to be jettisoned by the St. Louis Rams. The talk about Sam is there because of his sexual preference, but there is no difference here between Michael Sam trying to make a career for himself in the CFL as there is any other player coming north of the border. Like many, he has a story and we know about it. Lets let him do his thing and hopefully he is good enough that Jim Popp and Tom Higgins will allow him to stick around. The CFL and Alouettes  will get some added exposure during training camp much like Chad Ochocinco gave them last year, but at the end of the day, the story is can the guy play football. We will find out. All the best to him! I hope he comes in with the right attitude.

The call for the CFL season to be moved up again has started.  I am sure TSN wouldn't mind that seeing they don't have hockey, but will anyone watch if that were to happen. Say what you will about the Rogers package, but the Stanley Cup playoffs are the Stanley Cup playoffs.  I am guessing a majority of Canadians would be watching the final and not the CFL. Add that to the fact once the final starts, TSN will be all over it and then some and you wonder if the first two weeks would be a throwaway. That isn't what the league wants and it certainly not what advertisers or the network wants. I don't see this happening despite the cry out there to have it happen.

This question was asked of me on the weekend---What is David Braley's legacy as owner of the Argos? Hmmmmmmmm!!!

Mike Babcock is making more to coach the Toronto Maple Leafs in one year than what CFL teams are allowed to spend because of the salary cap. Let that sink in for a moment or two. A hockey coach is making more than an entire football team.

Speaking of salaries, give this a read as it is an excellent article on CFL pay.

The Miami Marlins had a charity night this past week where fans could mingle with the players. The problem is no players showed up. The players stated with their bad play of late, they didn't feel like socializing, but some believe it was a silent protest against the recent firing of manager Mike Redmond. Whatever it was, this was simply not right. You have 1) alienated a fan base who doesn;t get many chances to rub elbows with their favourite baseball players 2) you have snubbed your nose at whatever charity this event was going for and 3) you have embarrassed the organization. I can't imagine the backlash that would occur if this were to ever happen with the Saskatchewan Roughriders. The only difference is there is wayyyyyy too much class and respect in the Riders organization from Craig Reynolds right on down to ever see that happen here.

The Memorial Cup has started and while I do love the tournament, I always have wished you could have more teams involved.  I think the host team has to be in to make sure there is local interest, but could you have a March madness style event where play-in games are required to get into the actual tournament. While Kelowna is in, what about a game between Brandon and Erie to see who advances to the tournament seeing there were two Quebec teams already in.  With the event being held in Red Deer, you will have two WHL teams so why not have the runners-up in Quebec and Ontario play one game with the winner moving into the tournament. Its an idea that certainly has flaws, but its a idea to get a 5th team in. The RBC has five teams in their event and they can get it done in a week so why couldn't the Memorial Cup?

It is safe to say the NHL Conference finals have been everything we thought they would be and the chances of both going 7 are high. Give a lot of credit to Chicago who took a knockout punch from the Ducks in the 3rd period Saturday night, yet they found a way to tie it and win it.

A question for the Saskatoonites who read this blog. If the Edmonton Rush move to Saskatoon and your city is home to a National Lacrosse League franchise, will it work? Will you support it?  Its not the pro team you want, but its a professional team.  I have never been to a lacrosse game, but friends of mine have been to Calgary Roughnecks games and say it is something else.

UFC 187 was one of the better ones of late with several good fights----fights I became more invested in for reasons I won't get into. Lets just say it involved some Yukon Jack that could have turned into a lot of Yukon Jack. Daniel Cormier had best hope Jon Jones does not get his you know what together because when he does, it will be bad news for Cormier,  The Andrei Arlovski-Travis Browne fight was one of the best I have seen in my years of watching the action inside the octagon.

Finally, good god was it really 25 years ago??? 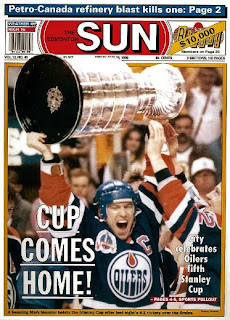 I am OK with not starting the CFL season until July. Gives me lots of time to spend time at the lake with no football to worry about.

Did you see the guy at the NFL vets combine? I am guessing he won't be on the opening day 53 man roster and he may not even make it to the second exhibition game.

I like the Mem Cup idea. I am guessing Sportsnet would too if it meant an extra game meaning extra revenue.

I went to a rough necks game in Calgary a few years back. I didn't know what to expect. But after my experience there one thing is for sure is that I would prefer going to a necks game than a flames game. I was just outstanding! I would support A saskatoon tram in a second. And I believe the city would as well. Bring it on!

Mark my words, with McDavid now in the fold, there will be another picture of an Oiler holding Stanley Cup high.

I know nothing about lacrosse, but like anything I will give it a try and if I am entertained, I will be back. If not, nope!!

Kind of sad we pretend to be a hockey nation, but require the host city's team be involved so fans will attend the memorial cup.
As a hockey nation doesn't the opportunity to see the best junior teams play for a championship be incentive enough?

Yeah I know its piling on but geez its been awhile since the Maple Loafs were there too. Good luck Coach Babcock
#KesselBackCheckingOrHellFreezingOver

I had a wicked hangover 25 years ago I guess.