The Saskatchewan Roughriders are pleased to announce they have selected University of Manitoba wide receiver Nic Demski with the sixth overall pick in today’s CFL Draft. 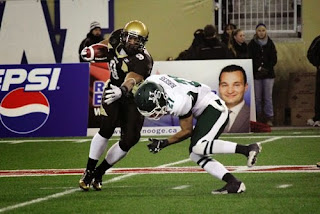 Demski (6’0 – 215 lbs.) has been selected by the Green and White after playing four seasons with the Bisons. In 2014 the Winnipeg, MB native made 27 catches for 589 yards and five touchdowns while also rushing 47 yards on six carries. The 21-year-old also contributed on special teams where he added 19 punt returns for 272 yards and a touchdown.

He was named a 2014 CIS second-team All-Canadian and a Canada West All-Star as well as playing in the East-West Bowl.

Other Rider selections tonight were

Three members of the University of Regina Rams were selected.  Receiver Addison Richards went #11 to the Bombers, defensive back Tevaughn Campbell went 22nd to Calgary and OL Aaron Picton went 53rd to Calgary.
at 5/12/2015

Demski is good, but there's not lot separating him and Addison Richards. I gotta wonder what the deciding factor was.

Demski is a Canadian version of Desean Jackson. I look forward to seeing what he can do.

Take the birthplaces away and you see Demski is more flash and dash. It is tough to see the hometown kid get passed over, but I think Rider fans will grow to love Demski.

However, if he doesn't pan out and Richards flourishes, Taman and Chamblin will hear about it for years.

Demski comes from a championship program and Richards does not. What more do you want?

Anonymous said...
This comment has been removed by a blog administrator.
5/13/2015

I went to Rideridiots.com thinking there would be a lot of backlash for not taking Richards and there isn't.

Demski is a different player than Richards and unfortunately for Addison, he's not the type of receiver they were looking for.

Is it safe to say looking at the amount of DL taken by the team that they realize they made a mistake in letting both Sholo and Zack Evans go to Ottawa?

Looks to me like they are trying to get some Canadian d-line which they had until the dumb decision to go "international" there.

This Abankwah kid better be off the juice when he comes to camp. I'm a little choked at the Riders for taking a guy who has already tested positive for roids because it is sending the wrong message!

Three good kids didn't get taken in the draft because three roid monkeys took their place. That isn't right!