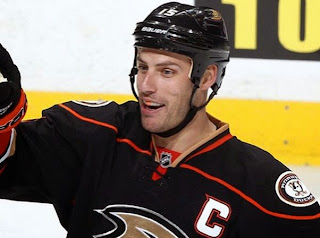 Ryan Getzlaf has ‘Messier-ified’ right in front of our eyes.

His jaw seems to protrude slightly more than it has in the past. His forehead looks more defined. His hair, as Alex Ovechkin pointed out, is now completely gone on top.

In fact, Getzlaf could maybe pass for Messier’s on-ice double if someone decides to make a film about the 1994 Rangers.

While the Ducks’ captain hasn’t had the same type of championship-like success as Messier, or an award named after him, he’s turned into a solid leader in his own right. You can see it most nights during the season at Honda Center, if you stay up to watch on the East Coast, which is sort of the case for most West Coast stars in the NHL.

Anaheim also doesn't quite have the same type of pizzazz as Los Angeles, which adds to the vacuum.

“Where do we play?” Ducks coach Bruce Boudreau asked. “If he was in any of the Eastern cities, everybody would know who (he and Corey Perry) are, and they’d be on national TV an awful lot.”

He can score goals, set up teammates, win face-offs at an over 50 percent rate and play in all situations. From the center ice position, he dictates the pace of play.

It has been this way for years with Getzlaf, but he’s only been a Hart Trophy finalist once – a year ago when he came in second in voting. He had 87 points last season and notched 70 this year.

While his skills are obvious the more you watch him the more you understand his genius as one of the top talents in the NHL. It's not just scoring with Getzlaf. It's everything.

As the Ducks prepare to face the Blackhawks in the Western Conference Final, Getzlaf will be a major focus for the Anaheim. He is its version of Chicago’s Jonathan Toews. While the two may not match up against one another, both teams will look to both players for production.

“He’s a passionate kid,” the 30-year-old Getzlaf said of the 27-year-old Toews, who has one more Stanley Cup to his name.

For the Ducks, winger Perry is the goal-scoring hammer like Patrick Kane for Chicago. Getzlaf and Toews are both do-it-all middle-men who are prolific in their own rights. Getzlaf has 12 points in nine games this postseason and leads Ducks forwards with 21:06 of ice-time. He leads all ducks forward in shorthanded time on ice per-game (2:16) and power play time on ice per-game (2:58) this playoff.

As the captain, if the team has questions for Boudreau, it’s up to Getzlaf to chat with the coach and act as a liaison.

He’s still never captained a team to a Stanley Cup. That, along with his inability to win ‘The Mess’ have been marks on Getzlaf. Well, maybe the latter not so much, but beating Toews, another finalist, can sway Mess’s opinion, since he still hasn't crowned his winner?

At very least, a victory over Toews in this series can boost Getzlaf’s Mess-like profile, which was already going in that direction from a looks perspective anyway.

Getzlaf is a good player, but he has a long ways to go to get into the Messier stratosphere!