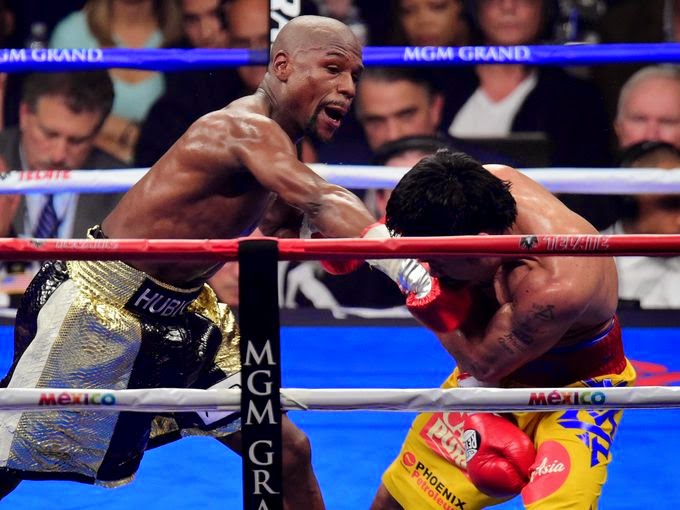 Floyd Mayweather Jr. definitively answered the question that has consumed boxing for more than five years.

Yes, Mayweather is indeed the greatest fighter of this generation, proving so Saturday night before 16,507 at the MGM Grand Garden Arena by masterfully out-boxing Manny Pacquiao en route to a unanimous decision victory in the so-called “Fight of the Century.”
Judge Dave Moretti scored the welterweight unification matchup 118-110, while Burt Clements and Glenn Feldman each had it 116-112.
“Pacquiao is a great champion and a helluva fighter. Now I see why he’s been so successful in the sport,” said Mayweather, 38. “He had his moments in the fight, but as long as I moved on the outside he wasn’t going to be able to catch me. He’s a really smart fighter, though.


Pacquiao revealed at the post-fight press conference that he suffered a right shoulder injury in training approximately two-and-a-half weeks ago, one that hindered the ability to throw his patented hook. Hall of Fame trainer Freddie Roach says they considered pulling Pacquiao out of the bout, and Top Rank CEO Bob Arum said surgery is a possibility.
Regardless of the injury, Pacquiao had his moments and the best one came in Round 4. The 36-year-old blasted Mayweather with a clean left hook, a blow that staggered the Las Vegas-resident to the ropes and forced him into a shell. Mayweather (48-0, 26 KOs) covered up and withstood a furious barrage from Pacquiao, catching most of the follow-up punches with his gloves. However, Pacquiao connected with several thudding body shots, sending the pro-Manny crowd into a boisterous roar.
“I caught him many times. I was never hurt,” Pacquiao (57-6-2, 28 KOs) said. “I was very surprised at the scores. I hit him many mores times than he hit me. I had no problem handling his power. I thought I won.”
According to CompuBox, it was Mayweather who landed more blows. In fact, he almost doubled Pacquiao, landing 148 to just 81.


The 147-pound champion was able to control the fight with his jab, a punch that frustrated Pacquiao and threw off his rhythm. Pacquiao was steadfast in his pursuit of Mayweather around the ring and was able to connect with shots here and there, but he usually absorbed two shots to land one.
“I thought we pressed the action,” said Pacquiao’s Hall of Fame trainer Freddie Roach. “I asked Manny for more combinations in between rounds. He may have fought flat-footed a little too many times, but I thought we won the fight.”
Pacquiao was the aggressor for the majority of the bout, but Mayweather was able to navigate the Filipino’s hard-charging shots and deliver his own, more effective counter blows.

Perhaps sensing he was down on the scorecards, Pacquiao went for broke during the final minute of Round 12, darting around the squared circle in an attempt to land that elusive home-run shot. It never materialized.
Mayweather said he didn’t believe this fight defined his career and that all his bouts played a key role in composing his legacy. That career, he says, will conclude with a September bout on Showtime, the last on his contract with the network.
“I have one more fight … and then it’s time for me to hang it up,” Mayweather stated. “I’m almost 40 years old now. I’ve been in the sport 19 years and have been a champion for 18 years. I’m truly blessed.”
With retirement in mind, Mayweather surprised the contingent at the news conference by saying he will relinquish his five championship belts (three welterweight and two junior middleweight straps) to free up the titles for young fighters. When asked whom he might consider for his swan song — perhaps Amir Khan? — Mayweather was evasive and said he just wanted to enjoy his victory right now.

The event is expected to shatter every revenue and pay-per-view buy rate record, with upward of $300 million and 3 million buys in play. The event cost a record $99.99 in high definition and ringside tickets were sold for $10,000, although none of those seats were open to the public.
at 5/03/2015

Who really cares, boxing is a joke.

The death of boxing as we knew it last night

Sadly, there were many better and cheaper things I could have done last night than watch that.

If those two fight again, they could put in Mosaic Stadium and I wouldn't go. Terrible!

Don't fret Oilers fans, there won't be any more Canadian teams left in NHL Playoffs by the end of this week. No Canadian team has won the Cup since Montreal in 1993 still.