What Did You Miss On Friday? 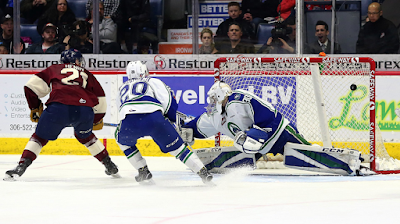 --Nick Henry's 14th goal of the season in overtime lifted the Pats to their 7th straight win as they beat Swift Current 3-2 in front of a sold out crowd at the Brandt Centre. The win was not only Regina's 40th of the season, but it clinches 3rd and sets up a first-round playoff showdown with the Broncos starting next Friday. Games 3 and 4 will go Monday and Wednesday at the Brandt Centre.


--The Calgary Flames saw their playoff chances take another hit.  Evander Kane scored four times in San Jose's 7-4 victory at the Saddledome. Calgary is four back of Dallas for the second wild-card spot with 10 games to go.


--University of North Dakota center Rhett Gardner has been named the National Collegiate Hockey Conference’s defensive forward of the year.

The award was presented to Gardner at the league’s awards celebration in St. Paul, Minnesota on Thursday night.

The junior from Moose Jaw  has seven goals and 13 points in 31 games this season and has won a career-best 57.9 percent of his faceoffs to rank sixth in the NCHC.

He also ranks third in faceoff wins (421) despite having missed six games due to injury. He is also a mainstay on a North Dakota penalty-killing unit that enters the NCHC Frozen Faceoff ranked third in the conference.

A fourth-round draft pick of the Dallas Stars in 2016, Gardner had five goals and 13 assist in 18 conference games and finished third in faceoff wins (253) and fifth in faceoff percentage (.578) despite the six games missed.

--Astros superstar second baseman Jose Altuve has reportedly agreed to a five-year extension worth $151 million that begins in 2020. The deal, which would be the richest in club history, begins at the conclusion of the deal he signed in 2013, and locks up one of the most popular players in club history through his age-34 season.

The five-time All-Star second baseman had his finest season in 2017, hitting an MLB-best .346 with 24 home runs and 32 stolen bases in 153 games en route to his first Most Valuable Player Award. In the process, he was a driving force as the Astros won their first World Series title.

--For the first time in the history of the NCAA Men's Basketball Tournament, a 16 seed has beaten a 1 and did they ever.  University of Maryland-Baltimore County shocked Virginia 74-54 in what is the biggest upset in the history of the tournament.  The number 1 seed had been 135-0 until Friday night when playing the 16 seed.

But he's too small, how did he even get a look?