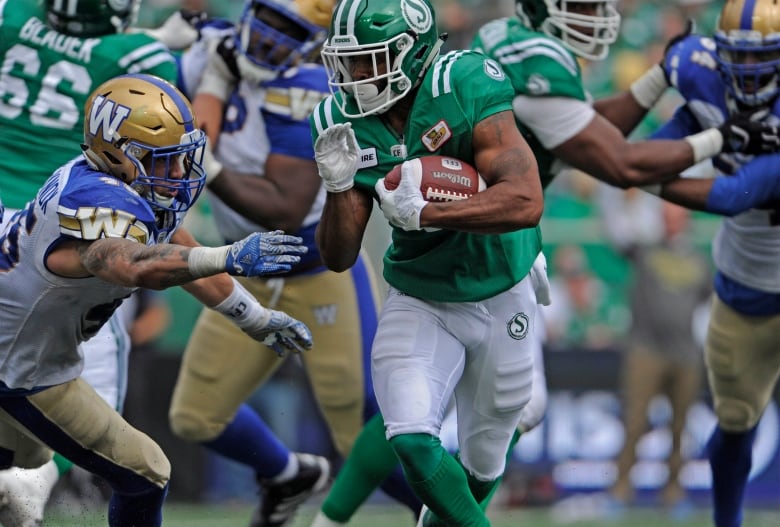 --Happy Labour Day everyone!  Like it usually is in the 306 on the day after the Labour Day Classic, the Riders and Rider Nation are celebrating another victory over the Bombers on the first Sunday in September.  I don't know about you, but the Bombers should wear different helmets when they visit Mosaic Stadium on Labour Day, because that "W" is highly misleading.  Then again, its the only "W" they see in Regina.

The 2018 LDC was the same script for the Riders as we have seen for most of 2018.  Defence and special teams.  Sprinkle in some youth and age as well.  Matt Elam got the party started with his interception on the first offensive series the Bombers had and Kyran Moore electrified the crowd as he took a punt back 65 yards.  The offence had its struggles, but when they needed to in the 4th quarter, Zach Collaros led the team downfield on two drives with one capped off by a touchdown toss to Marcus Thigpen (who had a great day) and the other on a Nick Marshall run after what I thought was a tremendous call late in the 4th to throw a deep ball to Jordan Williams-Lambert that put the ball at the 3.

As I have said before, it all boils down to Collaros.  No one is complaining about Stephen McAdoo's calls anymore, no one is complaining about Chris Jones. Some are wondering if his green "Diversity is Strength" shirt will be inducted into the Plaza since they are 3-0 since he started wearing it.  The negativity has stopped and the waters are calm.  Those waters will rise next week if the team should lose the Banjo Bowl which they might as history shows the Bombers to be much different at home than they are here.  Then again, when you don't win here, anything is considered an improvement right?

As all in sports will tell you, the football season is a marathon and not a sprint.  \The Riders are better finishers than starters.  That has been proven.  I don't know if they can catch Calgary, but they can certainly catch Edmonton for that much-desired home playoff game.

--What is the narrative in Winnipeg today?  The team with a lot of pressure on its shoulders stayed with the Riders for three quarters, but they couldn't finish the job.  Matt Nichols was his "average" self and the demand to put Chris Streveler back behind centre will certainly increase this week. Is Mike O'Shea's job on the line next week?  I would think that wouldn't happen, but who knows if the Bombers push the panic button if they lose.   All I know is there is no drama in Riderville right now and I'm OK with that.

--It is no secret I am not a Jays fan.  However, I do feel sorry for those who root for this team because of the way the squad has been dismantled over the past couple of seasons.  Those glory days that caused the bandwagon to fill up are over and once again Toronto is a dismal squad.  Like it or not, you can chalk it all up to the day they hired Mark Shapiro to run the operation. One of his first moves was to not retain Alex Anthopoulos.   Instead, Shapiro brought in his former Cleveland running mate Ross Atkins to run the ship----a ship that is sinking.

The Josh Donaldson trade is embarassing.  The dirty laundry is going to get spilled at some point perhaps as early as this week when Donaldson and the Cleveland Indians come rolling into Rogers Centre.   I would think there will be one huge ovation for the Bringer of Rain who did some great things over his time in Toronto.  The sad thing is not only did they trade him. They were so desperate to trade him that they even paid Cleveland to take him off their hands.  They aren't getting much for him either.  In fact, what have they gotten for the likes of David Price, Jose Bautista, Edwin Encarnacion and Donaldson.  Oh yeah, zip!   I am guessing John Gibbons can't wait to get out of Dodge.   I'll just sit back and watch while enjoying the Cubs take a run at the National League pennant.

--Can't be easy being a fan of Toronto sports these days.  Demar DeRozan and now Donaldson.  At least you have John Tavares!

--A lot was made about the Angus Reid CFL vs NFL poll that came out this week.  That poll didn't really surprise me at all.  I don't think it would surprise anyone in the CFL offices either.  The NFL is an animal that simply can't be contained in Canada.  The CFL recognizes that.  After yesterday's game at Mosaic, there are just two more Sunday games to be played until playoffs and both of those are in Montreal.  The CFL and TSN see that not many eyes will be on their games once the NFL season begins.   While I don't ever see it happening because of Hockey Night in Canada, I wonder if the CFL would ever look at staging a Grey Cup on a Saturday night in an attempt to avoid the NFL. You can be the biggest hard-core CFL fan that you want to be, and you can make argument after argument after argument as to why the CFL is better, but the fact remains that the NFL is "the" league when it comes to pro sports and that isn't changing anytime soon.

--A lot was also made this week about the Thursday night TV numbers and how the Riders stirred the drink.  Again, this doesn't surprise me.  The /=S=/ are Canada's team for a reason.  It is their games that are most often the most watched game of the week and with them being on Thursday night football four times, it would only make sense that those games would have a big TV audience.  Don't be surprised to see four more appearances next year and like it or not, one of them will be a home game.  I don't like Thursday home games and neither does a lot of Rider Nation, but every team will have one if this moves forward----which it likely will.

--The Canada West football season is off. It was a tale of two games Friday at Mosaic with the Rams and Calgary.  First, you thought Calgary was going to blow the doors off of Steve Bryce's crew and then they come back to lead at half-time only to let it get away in the second half.   The score isn't what the Rams wanted, but it was an entertaining football game with many big plays.  Some of those big plays were orchestrated by Noah Picton.  His time in a Regina jersey is coming to an end. You need to see the kid play if you haven't.  He became the first passer in conference history to surpass 10,000 yards and he very well could be Canadian university's all-time passer when this season is over. I have been fortunate enough to see just about every pass he has made during his University career.   You won't find a better individual. He is deserving of every accolade he gets.

--Jay and Dan's summer hiatus is over and they are back on TSN!  Can we put their show on CTV too? I would much rather see that than Ben Mulroney and his vacuous group of sidekicks on "E-Talk"!

--That's all I got.  Have a great holiday Monday and the rest of the week!


Just another enjoyable Sunday at Mosaic!


McCullough seems to think you can keep winning with D and ST. I disagree! The offence needs to move the football to keep the D off the field. I am not expecting TD's and FG's every time out, but there is still work to do offensively. Collaros is a definite improvement though.


Would love to see Donaldson come back to Rogers Centre next weekend and make it rain two or three times.


Just give best defensive player award to Hughes already. He just owned Bryant a couple of times yesterday. That was a major league oops by Huffer. He doesn't do a lot of those.

A Riders win at Banjo Bowl and O'Shea will be fired.

You're easy to please if you're happy with McAdoo.
If he was the OC and Richie Hall was the DC on the same team they'd never win a game.

Just because you pay a man to play football doesnt make the 8 sometimes 9 team CFL a pro sports entity. The audacity of some to even mention it in the same breath as the National Football League, a professional sports league of world reknown identity. CFL???? Only in 6 Canadian provinces does it exist... barely.

What I don't understand is why Canadians that follow the NFL feel that it is their God given right to belittle the CFL.

Do a column on that Scruffy.

Nate the wannabe, sorry the CFL doesn't meet your standards.

Zack Collaros doesnt get the win even though he took the majority of the Roughrider game snaps as the starting qb. ONLY IN THE cfl does this happen.