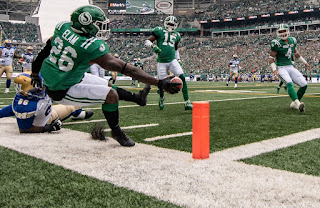 
--Make it three in a row for the Riders.  4th quarter TD's from Marcus Thigpen and Nick Marshall lifted Saskatchewan to its 3rd straight win as they beat Winnipeg 31-23 in the Labour Day Classic.  The Riders have won 13 of the last 14 LDC's.

--The Regina Thunder are 2-1 on the season.  They went to Edmonton and beat the Huskies 28-17.  The result leaves both teams at 2-1 with a rematch going next weekend at Mosaic Stadium. Brock Sich had 339 yards passing to go with two touchdowns.

--So much for seeing Vladimir Guerrero Junior in a Jays uniform before this season ends.  GM Ross Atkins said Sunday he will not be calling up the phenom for a late-season appearance.  Keeping Guerrero Jr. at triple-A for the rest of 2018 ensures the Blue Jays will have an additional year of team control over baseball’s top prospect.

--Josh Donaldson says he is leaving a city that he grew to love.  Donaldson made the comments as he made his first statements since being traded to Cleveland this weekend by the Blue Jays. Donaldson would not get into specifics about the situation surrounding his trade---one that has been met with negativity by Blue Jays fans.  He says being Cleveland gives him a new opportunity and a fresh start.

--Vegas Golden Knights defenceman Nate Schmidt has been suspended for 20 games. The NHL said Schmidt will miss the first 20 games of the season for violating the terms of the performance enhancing substances program. Schmidt played 76 games for the Western Conference champions last year. He had five goals and 31 assists.
at 9/03/2018