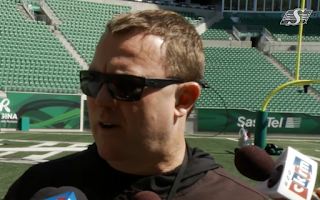 --A special teams blow to the Riders.  Head Coach Chris Jones announced Thursday that kick returner Christion Jones is being placed on the six-game injured list after sustaining an undisclosed injury during the Labour Day Classic win over Winnipeg.  It means Marcus Thigpen and Kyran Moore will handle the return duties Saturday in the Banjo Bowl.

--Kamar Jorden's season is over.  He suffered a major knee injury in Calgary's win over Edmonton Monday. “It was a serious knee injury — it was very unfortunate,” Head Coach Dickenson said. “He’s got multiple things wrong. He’ll ultimately have to get it fixed, work hard and see where things fall. There is a report Jorden suffered a torn ACL, MCL and PCL.  Meanwhile, a knee injury suffered in the same game by Edmonton's Derel Walker will keep him out 6-8 weeks.

--The Philadelphia Eagles won the opening game of the NFL season as they hung on to beat Atlanta 18-12. The game ended with Atlanta quarterback Matt Ryan throwing an incomplete pass at the Philly 5.

-- Chief Wahoo will not be back in Canada. The Cleveland Indians altered their jerseys ahead of a four-game series that began in Toronto on Thursday, removing the controversial caricature of a First Nations man. Players wore a navy blue cap with a red C on it and the red-skinned, feather-wearing cartoon was removed from its usual spot on the left sleeve of their grey away jerseys as Cleveland took the field against the Blue Jays at Rogers Centre. The move comes nine months after Cleveland announced that it would no longer use the logo starting with the 2019 season.

--Former NHL star Dave (Tiger) Williams is set to stand trial next year on sexual assault and assault charges over an alleged incident on a military morale-boosting trip last December. A lawyer for the former Toronto Maple Leaf and Vancouver Canuck, who holds the NHL record for most penalty minutes, says the trial will begin on June 10 and is scheduled to run seven days. Military police arrested and charged the 64-year-old Williams in February after he allegedly assaulted a steward on a military aircraft in December during a tour to meet with Canadian troops in Latvia and Greece.