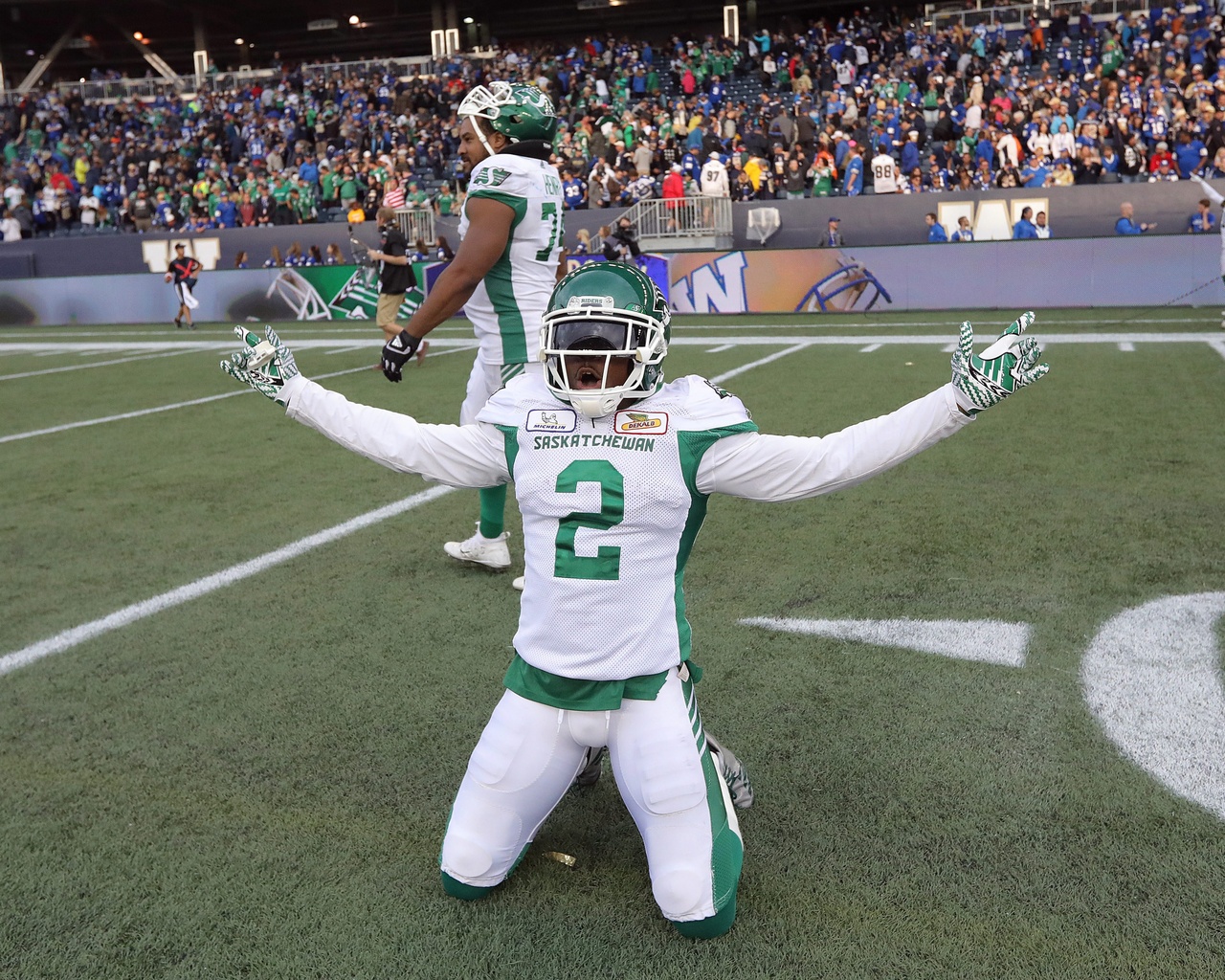 --I don't smoke, but I needed one after that game Saturday.  How about you?  The 2018 Banjo Bowl may have been the wildest football game I have seen this year.  Then again, Calgary and Edmonton may have one-upped that with their game right after.  What a bizarre game!  Where do you start?

I am guessing Rider Nation will be waiting for an update on Zach Collaros.  I don't know about you, but that hit he took from Jeff Hecht reminded me of the hit Craig Butler laid on Buck Pierce in Winnipeg a few years ago.  At least Zach didn't lose his helmet.  He went into the concussion protocol and as it stands now his status for Saturday's game vs Ottawa is up in the air.  The Riders are a different team if Collaros isn't under center. We have seen that this year.

Charleston Hughes has been the story for the Riders D this year. While Willie Jefferson has been making plays, his efforts haven't been as noticed as much until Saturday.  That may have been the best game Jefferson has played in Rider green and if you asked him, perhaps his career.  He was everywhere!!  The interception return was a thing of beauty, but yes he was guilty of hotdogging big-time.  That return was as long as the Ben Cahoon retirement ceremony.  It may be the play of the year for the Riders though.

--What now in Winnipeg?  Matt Nichols was a disaster and while Chris Streveler provided a little spark, he didn't really tear it up.  I would guess Nichols' days as a starter are over after this one, but the Bombers have the bye next week so Mike O'Shea has more time to think it over.  Then again with the bye, does it mean change?  I don't think the Bombers tell O'Shea his services are no longer needed,  but I'm not 100 percent sold that they don't.  If you make a change, it means you have basically given up on this season and are starting ahead for next year.  I think it is safe to say the Bombers aren't going anywhere this year----except for a possible crossover.

-How many of you thought Juwan Brescacin came down with the football on that last second hail-mary in Edmonton?  What an offensive explosion that was.  If there was any doubt that Bo Levi Mitchell and Mike Reilly are the top players in the league, that doubt had to be erased after that one. That was CFL old-style and was fun to watch.

--What did you think of the Saturday tripleheader?  I liked it and hope we get it again moving forward.  However, I do think both the CFL and TSN missed a golden opportunity in growing the game.  We have all seen "Hockey Day in Canada" and the features that accompany the three NHL games that we get.  This could have been "Football Day in Canada" with features from around the country on all levels of football before the first game and in-between games.  If this happens again next year, and there really is no reason to think it wouldn't, hopefully it can happen.

--I think we have all seen the Serena Williams meltdown by now.  Why are so many coming to Serena's defence for what she did? It's not the first time she has had a meltdown on court.  Yes, the chair umpire made some horrible decisions, but what is the difference from what she did compared to what a hockey player, football player, baseball player, etc. etc does when he/she argues with the official. She lipped off and she was penalized for it.  It's the same as a baseball player getting tossed for arguing balls and strikes or a hockey player getting a misconduct when he says something to the official.  Would this narrative be the same had it been Genie Bouchard in this situation?  Play the game, state your displeasure and go off in the post-game if you wish. All this did was keep the spotlight on her and not someone who was much more deserving.

--Nice bounceback for the Rams in Edmonton.  It was just a normal night for Noah Picton as he threw for over 400 yards and three touchdowns. Talk that Picton has no receivers to throw to this year (which is laughable) can be shut down as Ryan Schienbein, Kyle Moortgat and rookie Bennett Stusek all had big nights.  Stusek is going to be fun to watch over the next few years.  There are a lot of guys on that team that are going to be fun to watch over the next few years. I'm guessing many CFL scouts would agree.  The U of A looked confused for much of the football game and in the second half, it was like boys playing against men as the Rams allowed nothing.  UBC comes into Mosaic on Friday and they are coming off a 50-point beatdown at the hands of Calgary.  It should be a good one!

--The NFL has taken it too far when it comes to the "roughing the passer" penalty.  A defensive player can't be called for roughing the quarterback when he hits him and lands on him.  That is called football! If we are going to keep protecting QB's like this, just put flags on them.  There were wayyyyyyy too many of these calls on the first week.

--Good to see the Seahawks didn't do a damn thing in the off-season to address their offensive line woes.  What a pathetic excuse!  Good to see they "answered" their kicking problem by signing 102 year old Sebastian Janikowski as well.  That wasn't a good debut.

-The legacy of Aaron Rodgers grew somewhat on Sunday night.  What the Packers quarterback did in the 2nd half after getting carted off was amazing, but you would think by listening to Al Michaels and Cris Collinsworth that he had come back from a near-death experience to lead Green Bay to the win.  They milked that a little too much in my humble opinion.

--It only took one week of the NFL season for me to remember how much I can't stand Deion Sanders.

--Cleveland Browns fans can at least smile over the fact they didn't lose.  How do you not win that game when you were given the chances you were.  Oh right, they're the Browns!

--If you saw the Randal Grichuk injury on Sunday, tell me you didn't cringe just a little.  That was completely accidental and very ugly.  If you didn't see what happened to the Jays outfielder, I am sure its not hard to find.


Why can't we keep QB's healthy in Winnipeg!

Riders are a different team when Zach is in there. All of this positive momentum may have been flushed away if he is out for six weeks again.


You're not wrong on Serena! Accept defeat with class. Yes, she got the raw end of the stick, but you can't call the ump a thief. At least she didn't threaten to cram a ball down his throat like she did a couple of years ago.


Hoping Jones had a chat with Big Willie after his TD. You can't be doing that! He would have been crucified if he doesn't score on that play. Great win, but concerned about team moving forward if Zach is going to miss time.

Great play Willie Jeffersen. It was absoloutly awesome to see you cramm it down the Blue Bombers throats on your touchdown run, no mercy on them.
Also, you didnt do the "Bakari" on your run, you got it in the endzone for the 6. Kudos Willie Jeffersen and the rest of the Saskatchewan Roughriders Football Club on another great win.


The only people coming to Serena's defence are these feminists who believe sexism played a role. Think again!

Great idea for "football day in Canada". Don't know how you don't think of that.

NEWSFLASH * Willie did, Willie scored. Kudos out to Willie Jeffersen! He can do that!

I came up with possibly new thinking for the Gridiron for teams with quarterbacks playing so bad you'd swear they were getting paid by the opposition each week.
Let Nicholls "stand there" like he's going to take the snap but the key would be he touches the ball as little as humanly possible as a quarterback.
-Run a steady mix of Wishbone, Wildcat, direct snaps to skilled players as much as possible.
-time to bust off the cobwebs from "statue of liberty" the modified flea flicker (qb to running back; running back to Reversing Tight end to toss it to open recievers... maybe have him work on foot speed and when he brings the team to the line he sprints wildly to sideline and someone else takes his spot on the offensive lineup...
...if not, then it's time for the league to come up with the "Bombers Brew" subsidy..anyone proving they are a valid Winnipeg fan gets a discount at the booze stands so the pain of watching their team fades away over the weekend.
(sorry if this is double posting..computer crapped out while sending a earlier version of this)

"The only people coming to Serena's defence are these feminists who believe sexism played a role. Think again!"

I agree, she's playing the feminist card and she was playing against another female. Give me a break! That girl was going to beat her so she stole the spotlight from a very gracious young lady.

I really find it amusing that people complain about new rules in football that promote player safety then make a comment like “it’s going to turn into flag football or it’s not what football is”. I love football and have no issues what so ever with the new rules, especially one that is called against a 330 lineman who is taking liberties with a qb that is in a vulnerable position. I think fans forget there is a human element to pro athletes and they are someone’s son, father brother ect, and deserve to have a productive life outside and after football.

If these new rules bother fans maybe find another sport to follow because football is evolving with a focus on player safety.

Keep thinking that jack! Go watch badminton Hahahaha. Do you have a point to make or are you just going to name call without putting much thought into your post?


You gotta have balls to be a pocketpool type!