Another Day In The Books

Day 9 of Rider training camp is in the books. With a game on Friday, I think a lot of the vets that know they will play are starting to focus on hitting someone else, but they have a few more practices to get out of the way. 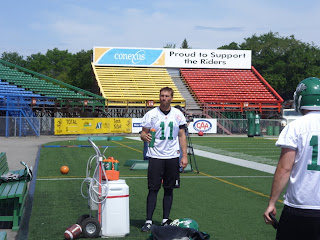 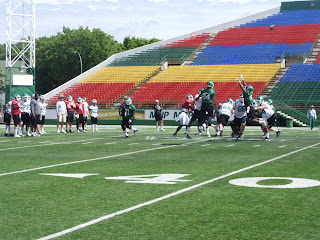 I think that's Shomari Williams tipping a Chris Leak pass. I talked to Shomari after practice today for an upcoming Riderville story to get his thoughts on coming in last year with the pressure of being the number one pick to coming in this year with a season under his belt.

Head Coach Greg Marshall wasn't really put under the microscope in his daily grilling. He did say don't expect to see a lot of Darian Durant Friday against the Eskimos. That being said. Marshall would not reveal his QB rotation.  He added he would like to see both second round draft pick Craig Butler and defensive end Brent Hawkins play on Friday, but injuries may not let that happen. Butler has the option to go back to Western Ontario for his final season of CIS ball. Marshall would rather he stay, but he did admit its something they may have to look at.
at 6/13/2011