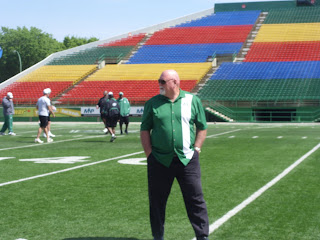 If this isn't the happiest man in the province, I don't know who is. Rider President and CEO Jim Hopson was all smiles yesterdady after announcing the football team made a profit of 6.6 million dollars in 2010. The number truly is staggering and when you consider they probably left over a million on the table by not winning the Grey Cup, it just shows you how popular the brand is.
I joked with Jim that he should have come out dressed as the Monopoly guy in the cart that drags behind equipment manager Gordie Gilroy's Gator with a bunch of money inside it. Just imagine that visual for a second.
I don't know if the Riders can break that figure in 2011, but I wouldn't bet against them.
------
How ya feelin this morning Canuck fans? How ya feelin this morning Boston fans? The pendulum has definitely changed in the Stanley Cup final. I said on the Sportscage yesterday that whoever wins Game 4 wins the series and I stand by that. Boston once again dominated Vancouver to a tune of 4-0. They have Cam Neely wave the flag before Game 3 and get eight goals and then Bobby Orr waves it and they get 4. Are they calling Ray Bourque for Game 6?.
The Sedins have disappeared again and Ryan Kesler isn't playing with the same type of jump he had (I think he's hurt). Luongo is struggling again and Tim Thomas isn't. I don't know if Vancouver wins again this year.
-----
All the celebrities were out at the Press Box last night. Jordan Eberle, Josh Harding, Mike Sillinger, Jamie Heward, Phil "The Thrill" Andrews and Chris "Big Red" Harris. With the exception of Phil and Chris, the hockey players in attendance will be taking part in the WHL Ride for Kids that has been going across the province and ends in Regina tonight. I'll be interviewing some of those for Access in segments that you will see on "Locker Talk".
-----
If you are a sports fanatic, you will want to pick up the book on ESPN called "Those Guys Have All The Fun". It details how the network started, the early problems it had and also deals with some of the internal scandals. Its a fascinating read and a very surprising one. The only book that might be better is when "The Life and Times of Rod Pedersen" comes out.
-----
The Terrelle Pryor to the Riders story is gaining some momentum. The sports website "Deadspin" has a headline saying Terrelle Pryor is getting ready to inherit Chris Leak's spot while ESPN has this story which includes some quotes from GM Brendan Taman. I've stated before on here that I don't think bringing Pryor to Regina is the right idea, but the Riders are going to look into it apparently so OK.
------
The LP had a story in Wednesday's paper talking about a possible summer concert at Mosaic and possible acts. The names of performers like Kenny Chesney, Taylor Swift, the Foo Fighters were thrown out there....acts that I would probably go see. Another one that was thrown out there was Ke$ha. Regina doesn't need an appearance by Ke$ha. If she comes, will they bring one of those forest fire fighting planes to dump a bunch of bleach on Mosaic to cleanse everything once the concert is over. A big no to Ke$ha thank you very much.
-----
Just to finish it off, here's someone I would have loved to seen in concert in the 80's. Thank god for "Hair Nation" on XM for bringing me tunes like this.....

Chesney would be outstanding at Mosaic.

The last two games have looked great on those whiny SOB's. I'd love to see two more schoolyard beatings like that.

she thinks we should go even though i don't like the music because she's a good performer and she wants to go.

I said "how did you like iron maiden? great performers, eh ?"

she didn't say anything. she, of course, didn't go and called the music "crap."

is it in response to craven being cancelled ?

I don't know where this franchise would be without Hoppy!!!

There is nothing wrong with Lita Ford!!! Good call!

the entire campground in underwater.

if the campground was half under water, ok there might be hope. but all of it under water. no way.

i thought it couldn't get any worse than last year. i thought wrong!

I would love it if Taylor Swift came back to Regina. I love her!!!

If Ke$ha wants to come to Regina, she can play Currie Field!!!!

The LP story also mentioned it could be Britney Spears. I'd go to that.