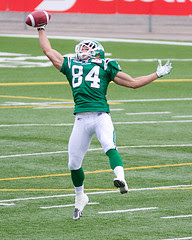 It doesn't count in the standings, but a win is a win and the Riders have one under their belt after a 23-22 win over the Eskimos. Greg Marshall says it wasn't tough evaluating his players as you might think when it was so cold and windy out, but make no doubt about it, it was tough for both teams to do what they wanted to offensively. Here are just random thoughts on the games followed by some post-game scrums.

--Marc Mueller looked fine. He didn't get a lot of reps, but did you really think he would? He showed nice touch on that medium range pass he completed and its too bad that drive ended in a fumble as it would have been nice to see him put one in the endzone.

--Is returning kicks the way for Hugh Charles to get on the roster on a full-time basis. Many Rider fans are hoping so.

--Was this pre-season or the middle of the year for Rod and Carm. Both sounded in mid-season form for game #1. Kudos as well to Phil "The Thrill" Andrews for a bang-up job at half time.

--Thank god it didn't rain! I thought I would have the look of a drowned rat when that game was over, but nope! It was windy and it was miserable, but I was warm and that is what matters.

--I just don't know what the Riders will do with the linebackers they have. They can't keep everyone. Simpson, Freeman and Lucas should be the starters, but Stewart, Bullock and Graham are all very good players as well. That's a decision that the coaches don't mind having, but its a damn tough one.

--There were some special teams issues, but Craig Dickenson's work with this unit is already showing drastic improvement from last year.

--The battle for the backup isn't over as both Ryan Dinwiddie and Cole Bergquist played well. My nod goes to Dinwiddie though,

--My nod also goes to Darren Szabo as the new public address announcer.

--Why oh why would a majority of you vote for "The Last Saskatchewan Pirate" as the 4th quarter stretch song. You had a chance to change things and you didn't. SHAME!!!

Last Sask Pirate was easily the best choice offered...the Stereos Throw Ya Hands Up and Kiss Shout It are the epitome of suckitude...gimme some Sweet Caroline or Don't Stop Belevin' and I'll be onside! The dude in the first quarter was embarrasing...bring back Evan Bray or give Joe Hadesback a shot...the Pa announcers sucked!

I know its just one game, but I really like the future for Chris Graham. He was the best defensive player out there last night.

Thumbs up to all the fans who stayed until the end and made it tough for Edmonton to hear. It was only pre-season and the fans were into it. LOVE IT!!!

I hear ya Scruffy and I voted for Shout it Out Loud. I hate the Last Saskatchewan Pirate. Speaking of songs, how about the new Rider song played before the game by that girl. What was the name of it? What happened to "Paint The Whole World Green"?

The only thing that could have made Mark's nite better was if Ronnie would have seen it. I can't imagine how proud he would have been of his grandson.

Rather than the crappy choices for the 3rd quarter stretch, why not something from a Sask band like the Sheepdogs or failing that Elvis.

Is the buzz around Nunn now being moved to Wheelwright?

The problem with the Last Saskatchewan Pirate is that for those of us who have been to every game in recent years it has become stale and tiresome. Give it a rest for a few years, perhaps bringing it back in 2020 for its nostalgia value during the Rider's 110th anniversary.
KJ