A Busy Day, A Tough Day

June 1 was definitely one of the busiest sports days we have had in a while. Where do you start?
I guess I have to start with the surprising release of Chris Szarka by the Riders. I had many ask me over the off-season if number 33 would be back and I would confidently say yes saying he has one more year in him. I guess I was wrong.
I don't have to tell you that Chris is one of the good guys and the way it comes to an end is really, really crappy. However, the economics of the game and his age just no longer added up so this is what happens. Yeah, I would have liked to see the team do this sooner, but rather now than embarrass him by making him a camp cut.
There are many good memories of Zark, but the one I sadly will remember the most is the picture on TV of him weeping uncontrollably after the crushing 13th man defeat in Grey Cup 2009. The gentle giant wasn't weeping, he was sobbing. That image along with one of Ken Miller walking off the turf are pictures that are burned in me much like Tony Gabriel catching that damn Tom Clements pass and Dave Ridgway splitting the uprights in the 89 Cup.
He will go down as one of the most popular Riders ever. He is what being a Rider is all about and he is a certain plaza inductee. Hey, if this team could find a spot for Marcus Crandell as a coach a few years ago, it could do the same for "The Councillor".
----
That news came down at the same time that the news came down about Rob Bagg re-injuring his knee. It is a blow to the Canadian air force losing Fantuz and now Bagg, but this will give Jason Clermont a chance to show that he still has it and it may open the door for Cary Koch as well.
------ 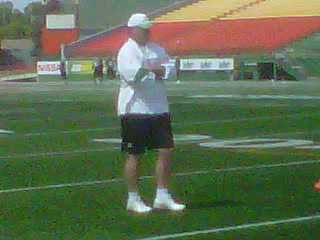 It had to be a day Greg Marshall was waiting for since being named head coach as he put the guys through the paces on the opening day of rookie camp. Not a lot was really done as many of the imports had to be educated on the Canadian game. You can't expect a lot from rookie camp. Some guys will look great amongst the rookies and then not so much when they get in there with the vets. That being said, keep an eye on receiver Terrence Nunn.
-----
Congrats to U of R Rams receiver Brenden Owens who has signed a deal with the Ti-Cats. They like those Ram receivers (Bauman, Getzlaf, Owens)
-----
From football to hockey..... 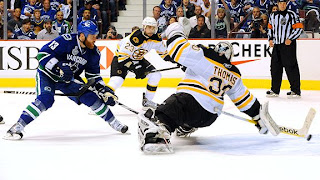 I was about to Twitter that I perhaps seen the most entertaining 0-0 60 minute game when Raffi Torres scored in the final few seconds to give Vancouver a 1-0 win over the Bruins in the Stanley Cup opener. It was a great hockey game from start to finish although the work of the men in the striped shirts left a lot to be desired. If this is what we are going to get, strap yourself in because it will be a great final series.
----
Did Alex Burrows have a post-game snack? He didn't need one after having an in-game snack!
----
If you saw the 2nd intermission of the HNIC feed, you saw CFL commish Marc Cohon in the private box of NHL commish Gary Bettman. I really don't know if that's a good thing or a bad thing. What on earth would those two men discuss? Maybe Gary gave Marc a manual on how to keep the league out of Quebec City. Maybe Gary asked Marc to tell him 10 good things about Winnipeg. Speaking of which, was it just me or do you think Gary threw up in his mouth a little when he said during the welcome back to Winnipeg newser that it was his wish the league had never left in 96.
-----
Just a thought here. With Pierre McGuire and Glenn Healy standing between the benches for NBC/CBC, if a player from either team shot a puck into that area hitting both would that player or could that player be nominated for an Order of Canada award. Why not?
-----
This might be the script for "The Hangover 3". Check this guy's story out.
------
TSN does a great job of covering big events, but I have to say that Sportsnet beat them on Tuesday with the welcome back to Winnipeg coverage. First off, I couldn't believe TSN kept French Open Tennis on the main network and then they were beaten by live interviews with both Bettman and Mark Chipman by Nick Kypreos and Daren Millard moments after the presser was over. The only area where TSN won was the reports by Sara Orlesky. Sara is a Winnipeg goal and I don't think her smile could have been any bigger. She knew what this meant for her hometown and she certainly displayed the pride she has for it.
----
Jay Triano has been let go by the Raptors. Who seriously would want that job?
-----
The Regina Red Sox won their first game of the year 11-5 in Yorkton. The Cardinals will be here Friday for the home opener. Alas, I won't be there, but I will be at Currie Field a lot this year. I recommend you go check out the ball team.
-----
While not at Currie Field, I will be in Nipawin for the SJHL AGM. Before that happens on Saturday, I will hopefully get a chance to golf the Evergreen Course on Friday. I love that layout and I'm hoping the forecast which calls for showers does not happen.
-----
Where can one lobby for either Dan McIntosh or JC Garden to become the new 6 o'clock anchor at CK Television?
-----
Being a human, is like being a Goalkeeper. No one will see how many goals you've saved, they'll only see how many you've missed.
at 6/01/2011

Hopefully Cohon sat down with Bettman and told him to take the stick out of his ass and be receptive to people. I too cringed a little when I saw that,
As for the hockey game, what an outstanding display of the game. Great goaltending, electric atmosphere, hard hits, fast skating, great chances. I don't know if Boston can recover from losing so late, but I'm hooing Games 2 and however else it goes are the same.

That story about the Canucks fan is wild. I wonder if Aquilini would confirm it?

Thomas was unbelievable last night. I kept waiting for Luongo to give up a softie but he didn't.

Is it just me or did Cohon and Bettman look surprised to see McLean in there. I hope Cohon told him that everything will be fine in Winnipeg.

Good point on offering Zark a position within the team. If they can do it for O'Day, do it for Chris. He's meant just as much if not more to this team.

Every former Rider should get a job with the team. That way they won't ever leave and we can love them forever and ever. Amen.