I'm thinking most of you that read this blog on a daily basis (and I thank you for that) will be glued to a television somewhere tonight to watch the end of what to me has been the most entertaining Stanley Cup Final that we have seen in a long, long time.

The Vancouver Canucks are more than deserving of the Cup if they win even though they were badly outplayed in Boston while the Bruins are also deserving having outplayed Vancouver in this series. It should be a great Game 7 and chances are it won't be a superstar that plays a big part in the win. Here are 5 recent Game 7 heroes...


(From NHL.com)
2009: Maxime Talbot, Penguins -- The enduring image of Pittsburgh's first Stanley Cup title in 17 years will be Marc-Andre Fleury's lunging stop on Detroit captain Nicklas Lidstrom in the closing seconds, preventing what would have been the game-tying goal. That Fleury saved the day came as no surprise. Less expected was Talbot, a pest and grind-line skater who never has scored more than 13 goals in an NHL season, would provide all the offense for the Penguins in a 2-1 victory. There were, however, some signs Talbot had this clutch moment in him. The previous year, when the Red Wings beat the Penguins in six games for the Cup, it was Talbot who delayed the celebration in the Motor City by scoring late in Game 5 to tie a game Pittsburgh went on to win in triple overtime. He finished the 2009 postseason with 8 goals.

2006: Aaron Ward, Hurricanes -- It would be pretty safe to term Ward a "stay-at-home" defenseman, given he scored all of 44 goals in 839 career games, and never more than 6 in a season. That career season came for Carolina in 2005-06 as the franchise made a bid to win its first Stanley Cup. Ward had just 1 goal in 24 postseason games as the Hurricanes entered Game 7 of the Final looking to stave off a comeback by the upstart Oilers, who had rallied from a 3-1 series deficit to draw even. The opening goal figured to be critical, and it was Ward who got it just 1:26 into the game. Another unheralded defenseman, Frantisek Kaberle, doubled their lead and Cam Ward brought the Cup home with a 3-1 win.

2004: Ruslan Fedotenko, Lightning -- Save for a breakout 26-goal season in 2005-06, Fedotenko has been a forward you generally can count on for 10-19 goals per season throughout his career. During the 2004 postseason, he nearly matched his regular-season output (17 goals in 77 games) in 53 fewer games. Fedotenko erupted to score 12 goals for Tampa Bay, but you couldn't find two any more important than the ones he put up in a decisive Game 7 victory against Calgary, as the Lightning won 2-1 for the franchise's first championship. Fedotenko would be similarly prolific for the Penguins in their 2009 run, with 7 goals in 24 games, giving him 19 goals in 46 games over those two Cup runs. Talk about opportunistic -- Fedotenko has 1 goal in 42 games during seven other trips to the playoffs.

2003: Michael Rupp, Devils -- There couldn't have been a more unlikely Game 7 hero when the Final began that year, because at that point Rupp hadn't skated in an NHL game since March 28. An injury to Joe Nieuwendyk opened the door, and Rupp finally got his first taste of the playoffs in Game 4 of the Final. He had an assist in Game 5, but that was his only point in his first three games. Then came the all-or-nothing Game 7 in New Jersey. Martin Brodeur was flawless in goal, but he needed a little assistance from his offense. Rupp would be the go-to guy, getting the deflection on a Scott Niedermayer shot early in the second period to put the Devils on the board, and then setting up a pair of insurance goals by Jeff Friesen in a 3-0 win that gave New Jersey its third Stanley Cup inside of a decade.

2001: Adam Foote, Avalanche -- It's more of a stretch to find an "unsung hero" in Colorado's vanquishing of New Jersey, as the key contributors in Game 7 for the Avalanche -- Alex Tanguay, Joe Sakic and Patrick Roy -- all were household names, as was Ray Bourque, the veteran defenseman whom the team so badly wanted to make a Stanley Cup champion for the first time. The steady, underrated Foote helped set up Tanguay's decisive goal in a 3-1 victory by clearing a puck off the boards and ahead to Sakic for a breakaway. Brodeur denied the chance, but Tanguay buried the rebound. Foote also was instrumental in the Avalanche even seeing a Game 7 -- with the Devils leading the series 3-2 and looking to finish it off at home two nights earlier, Foote had the opening goal and added 2 assists in a 4-0 win.

Mark Recchi is no stranger to a Game 7. This will be his 11th. The Sedins are Vancouver's Game 7 leaders having played in 5 each.

So once again, the biggest hockey game of the year will happen in Vancouver with a team from Canada taking on a team from the U-S with the winner getting the glory at night's end. In February of 2010, I cheered for the home team, but I won't be doing that in June of 2011. I wasn't a big Canucks fan going into the playoffs and they haven't endeared themselves to me at all during this playoff run. The latest came on Tuesday when predictably the Canucks complained about the play where Mason Raymond was injured saying Johnny Boychuk should be disciplined by the league. I don't think anyone in the rink realized Raymond had been hurt as bad as he was when he was helped off the ice. While Vancouver complains about that, you don't hear Boston complaining about the big elbow that Alex Edler threw at Rich Peverley. You didn't really hear Boston complain about the Burrows-Bergeron incident in Game 1 as well. They have just gone about their business.
----
My thoughts on Game 7. The earlier Boston scores, the better their chances. If Luongo gets on a roll, it could be another one of those 1-0 or 2-1 games. If the Bruins score early, it could be 5-2 or 6-2 or worse.
-----
Sportsnet is reporting if Nathan Horton gets medical clearance, he could play in Game 7. Watch the Canucks howl if that happens.
-----
When it is over, it will be interesting to hear from both teams just who was playing hurt and how hurt they were. While not many are 100 percent healthy, I will be interested to see what was wrong with guys like Zdeno Chara and Ryan Kesler.
-----
UFC fighter Diego Sanchez is going to be in La Ronge in a couple of weeks. I'm also hearing he might be participating in a golf tournament in Saskatoon. Organizers are also trying to get Clay Guida and ring-girl Brittney Palmer to that event. I think Guida and Palmer need to get into the Sportscage if indeed they are coming to Saskatchewan. I wonder if I should get in contact with Sanchez's people and tell them that Ice Wolves play-by-play man Daniel Fink has been badmouthing him. I couldn't that to Daniel. If it was Melfort's Gino DePaoli, I wouldn't hesitate and if it were Flin Flon's Rob Hart, well he'd probably take Sanchez down so never mind.
----
Speaking of SJ play-by-play guys, those of you in Yorkton can agree or disagree on this one. Were GX94 sports guy Craig Stein and CTV Regina weatherdude JC Garden separated at birth. Take a good look at them.
-----
The forecast is calling for rain Friday night, but I could care less. I'm very excited for Friday's game due to the fact that I am going to be a part of Rider Radio this year. It was a big thrill as a Saskatchewan boy to have a chance at doing that last year for two games, but it will be great to have a full time role on the broadcasts this year working with the likes of Rod, Carm and the rest of the gang. Its going to be a lot of fun.
-----
The Jays are 6 1/2 back of the Red Sox in the AL East and 5 out in the wild card chase. Do they have a shot at the playoffs? If they don't, do they start peddling guys like Aaron Hill and Corey Patterson. I'd throw Edwin Encarnacion into that mix, but who would want EE.
-----
Who ya got to win the US Open?
----
Are ya going to watch the Stamps-Lions pre-season game?
----
Quote from Ray Ferraro: Its hard to imagine the Canucks winning Game 7 if they don't score. REALLY?????!!!! CMON Ray!
-----
Rob Vanstone went to Bridesmaids last night. He must be in some serious you know what with Mrs. Rob to have to endure that. If he went of his own volition, he should be forced to hand in his man-card.
-----
Speaking of Rob, he had a bit in his weekly "Robservations" stating that a young man in Redvers by the name of Chris Thibault had recently drowned. I met Chris going to the Grey Cup in Montreal and ran into him quite a few times that week. He had seen me at games and had Facebooked me quite a bit asking how the Riders were looking. I hadn't received any Facebook messages from him this year, but didn't think anything about it. My way overdue condolences to Chris and his family.
-------
Someone should really tell Mark Cuban that he can hand the NBA championship trophy off for a few minutes..... 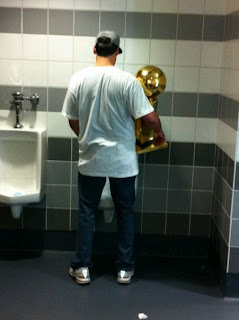 I've got Lee Westwood as the favorite for the U.S. Open. I also think Phil hasa great chance to win this week. I'm also thinking 4 under will be the winning score.

It must hurt you to see Aaron Ward on TV doing his thing for TSN.

I hope Vancouver loses bad tonight so it will shut up both them and their highly obnoxious fans. Calgary, Edmonton and Ottawa fans weren't this bad when their teams were in. I will hold judgment on Montreal or Toronto because they're bad enough as it is.