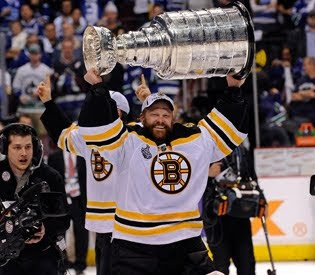 The Boston Bruins are Stanley Cup champions and there is no denying it. They manhandled what looked to be a very disinterested Vancouver Canucks 4-0 to take it in 7. Was it just me or did Vancouver come out flat in this one. Tim Thomas maybe made one tough save the whole night. Once again, the Sedins were invisible and well, what can you say about Roberto Luongo. He didn't soil the linen like he did in Boston, but he was far from good.
-----
As you all know though the story of the night is not what happened inside Rogers Arena, but what happened in Vancouver. Punks, degenerates, hoodlums, waste of skins, etc. etc. etc decided to make a repeat of 1994 by rioting. Hooliganism at its best. British soccer fans would be so proud. The thing is these jackholes are so f#in stupid that in this day of video cameras and everything, they did nothing to hide themselves so it shouldn't be hard for Vancouver police to find them and prosecute them----and prosecute them they should. Hard time is what some of these idiots need. A lot of questions need to be asked, but one of them is this. Will Vancouver police ever allow what we saw last night during the game to happen again. I don't know how many thousands of people were on the street to watch what they hoped would be a Canucks win, but I'm guessing that next year should the Canucks make another Cup run that people will be told to stay home or else.
----- 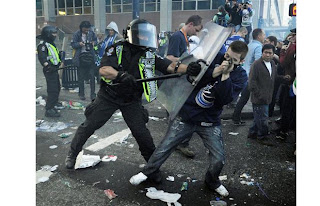 Am I the only one that just wishes Vancouver police would have started cracking heads and asking questions later. These hoodlums didn't deserve a warning, they deserved a baton to the bag or a water cannon shot or something. Not only did these people embarass themselves, they embarrassed their city and their country. While many of them were wearing Canucks jerseys, I can't blame the team on this one. Why did this happen? Would it have happened had Sidney Crosby not scored the golden goal? As I said, these clowns were caught on video and I hope a large majority of them are caught and they are given jail time---no fine, but jail time. Is Guantanamo Bay available?
-------
Did anyone see TSN's Ray Ferraro last night. Word is he walked into a glass wall and broke his nose. Ferraro--being a hockey player though---continued on with his TSN duties even though he looked like he had been through a war. I wish there was footage of said incident.
------
I now know what happened to my Grandmas old couch. Don Cherry turned it into his sportsjacket last nite. That one might have been his all time worst. WOW!!!! Speaking of HNIC, they did another stellar job post-game making sure that every member of the Bruins they could find got at least two minutes of air time. Great stuff!!
-----
Just to lighten it up, Vancouver police were going to ask Roberto Luongo to come out and voice a message to stop the riots. However, they were quickly reminded that Luongo can't stop anything! (Thanks to Adam Geiger for that)
-----
If you are a Bruins fan like my buddy Rob Swallow, congrats.
at 6/16/2011

luongo has probably played his final game for the Canucks. Can't see their fans forgiving him for this one.

And Vancouver hosts the Rider's next Grey Cup victory. Scary

Lions win an exhibition game and the city riots. LOL

And then people wonder why males aged 16-24 get a bad rap. There ya go. Scruffy, you ask if you are the only one that thinks police should crack heads and ask questions later. No you're not. I'm right with you. A little more of that last night and some things may not have happened.

First off, I am disgusted with what happened after the game last night. Rider fans would never ever do that. Did we do it in Toronto when we won. NO! Did we do it in Calgary and Edmonton when we lost. NO! I think a lot of us wanted to throw or burn something after the 13th man but we didn't.

Lets be honest here. Boston was the better team and had it not been for some bad breaks, this series would never have gone 7. It should have been over in 4.

This looks real good on those whiny bitches and I hope they stew on it all summer.

Looking at the photos on the Globe and Mail website, it is amazing how many idiots stuck around just to take photos on their cell phones, getting in the way of the cops trying to control things. Yes, cell phones may cause brain cancer, but there is an argument that they also reduce the level of the user's intelligence. Cell phones, a favourite toy for many these days, remain a blight. Years ago I pledged never to own one and have saved much cash for better use.

Cherry could have stopped the riot with that jacket. That was the ugliest thing I have ever seen.

PS: Nothing wrong with a baton to the head every now and then to restore law and order.

I was wondering if Ferraro got popped by someone. That schnozz looked nasty!