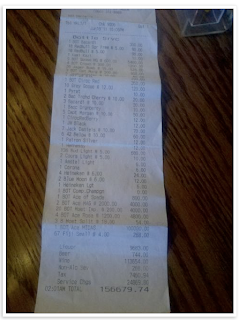 Yes, you're looking at that and wondering how Derek Meyers is going to pay off his bar tab for May at the Press Box, but that isn't his tab. Its not Pedersen's either. What you are looking at is the Boston Bruins bar tab after they celebrated their Cup victory in Boston on the weekend. 157-thousand dollars!!! Here's a little bit more on that party .

You may notice on this bill that someone ordered an Amstel Light. I figure the Bruins were being charitable and sent that via Fed Ex to Vancouver so that Henrik and Daniel could share it.
------
Nick Lidstrom is coming back for a 20th season in the NHL. Who does he think he is--Chris Chelios?
-----
Word is Dwayne Casey, an assistant coach with the Dallas Mavericks, is the new coach of the Toronto Raptors. Talk about a precipitous fall.
-----
Rob Vanstone not only "Robservates" me this week, but he then goes on a blasphemous and highly unsolicited attack on yours truly while visiting with Derek Meyers on the Global roundtable last night. What a cad!!
-----
Speaking of Duke(his 3rd reference in this posting), he will join me today as I  host the Sportscage for the next two days with Rod Pedersen in Vancouver with the Riders. Sportsnet's Gene Principe will join me as I want to know for sure if the Oilers will take Ryan Nugent-Hopkins in Friday's draft. I may also have to ask Principe if the story of another Ryan--Smyth is true. Apparently, the former Moose Jaw Warrior has told the LA Kings he wants to go back to Edmonton. The question is do the Oilers hierarchy want him back. Chris Cuthbert will also join us as will Arash Madani with his bi-weekly Madani Report. Arash is at the NHL board of governors meeting in NYC so perhaps he will tell us what Winnipeg's moniker will be and if the player that the Winnipeg team drafts will get an official sweater and hat on draft day.
-----
Word Monday night that the Comedy Network has cancelled the Sports Show with Norm MacDonald proving once and for all that sports and comedy do not mix on TV  unless your names are Jay Onrait and Dan O'Toole. (In a scary development, Onrait just did a bit on this as I was typing it up).
------
I tried forming a Rider roster on Monday night. All I have to say to Greg Marshall and Brendan Taman is GOOD LUCK!!!! Its not easy! You try it.
-------
Life is not easy for those in the southeast. I hope all goes well for those in the Estevan and Weyburn areas. The pictures on TV are amazing.
------
What type of record would Ricky Romero have if he could get some offence from his Toronto teammates. I'm not saying Romero could be another Roy Halladay, but he could be a 20 game winner if his offence decides to co-operate with him.
------
If this isn't a reason to go to the Queen City Ex what is.....

http://www.thequeencityex.com/entertainment/stampede-wrestling
------
Hugh Hefner's fiance calls off their wedding on the weekend and Hef is already back on the horse. I can only salute this man and credit him for fighting through the obvious pain he must be feeling. Who's kidding who, I think every fella that reads this would just like to spend one week in his smoking jacket.
-------
A GOOD friend knows if you like Coke or Pepsi... A GREAT friend adds the VODKA!!
at 6/21/2011

Have you seen the pics. Seguin and Marchand were having a "good" time.

Meyers can't have that bar tab at the Press Box because he has it at Habanos!!!!!!

No matter who Marshall and Taman keep, a good player or two will be set free and succeed somewhere else. Its just a part of the game. I'd rather have too much talent than not enough.

Q: Now that Mueller has been released by the Eskimos, is he a free agent. I'm just wondering if the Riders could bring him in next year or if he is bound to the Eskimos.