The Riders continue to get ready for Friday's exhibition opener at home against Edmonton. Coach Greg Marshall admits he is excited to step out on the sidelines for the first time as a Head Coach, but he adds he is excited for the players to show what they can do. Marshall also admitted he will be cheering for the Boston Bruins tonight and that he has tweaked the sked so that coaches and players can watch the game if they wish. When asked if he has the thought of turning to TSN2 to watch BC and Calgary, he responded with "We'll get the game tape."

Another special teams practice was held today and part of that practice was a fun drill in which players sprinted about 20 yards and then raced back to determine quickness. Tristan Jackson had Weston Dressler in one race, but he slowed up allowing Dressler to win. That had Richie Hall screaming "Why did you slow up? Why?" I don't know who eventually won, but John Eubanks was most impressive. That's the first time that I've really noticed Eubanks. 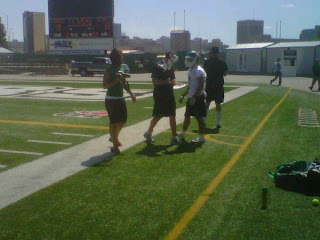 It was Weston Dressler's birthday yesterday and no one did anything. It was Luca Congi's birthday today and he got pied. I don't know if Dressler was the culprit. 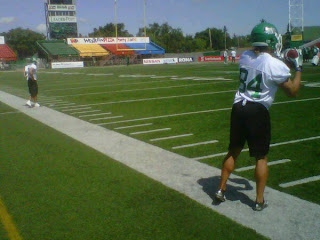 I don't think Cary Koch is lobbying to get into the game to quarterback a couple of series despite what this pic shows.

I should also tell you Coach Marshall said Brent Hawkins won't play because of his shoulder injury. At what point do you start getting concerned about that injury considering he was really the only pass rush the team had last year.
at 6/15/2011