There's A Lot Of Canuck Hate Out There

We will go to a Game 7 in the Stanley Cup final after a very uninspiring performance from a team that could have clinched it all. The Canucks were once again horrible in Boston as the Bruins won 5-2 to force a one game showdown Wednesday night.

As Boston started to score, the Twitter world went wide with shots at both Roberto Luongo and the Canucks. This one might be my favourite. 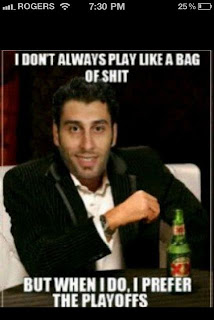 Some other tweets that made me chuckle throughout the night

NBC thanks Luongo for highest rating of a prime-time comedy since Friends went off the air.

Less than 10 minutes into Game 6 and its 4-0. If this was baseball, position players would be pitching.

If you look up "worst case scenario" in the dictionary, the book will fly out of your hands and beat Roberto gloveside

Is that Troy Gamble stretching in the tunnel?

Have the riots started yet?

Is that Luongo or Lebron in net?

Tim Thomas and hockey fans across the nation are thinking "I would have those three".

There is a lot of Vancouver love in this final, but there's a lot of hate too, A LOT of it.

As sad as the Canucks were in Game 6, they can still win this thing and they can still do it on the shoulders of the much-maligned Luongo. Crazy!
------
I watched Mike Emrick and the NBC crew do the game. Please tell me that Craig Simpson did not say the Canucks should run Tim Thomas. How asinine a comment is that. I know a lot of people have been very critical of Jim Hughson and his play-calling in the final because he is a BC boy. I haven't really paid a lot of attention to that, but if Simpson did say something that stupid I guess you know what side of the fence CBC is sitting on. Shameful!
------
For those still on that Vancouver needs to win the Cup because they are from Canada routine, I give you this. Boston goals scored by Brad Marchand (Nova Scotia), Milan Lucic (Vancouver), Andrew Ference (Edmonton), Michael Ryder(Newfoundland) in that first period. That's Canadian enough if you ask me.
-----
Sportsnet's ( and Sportscage Insider) Arash Madani is reporting Matt O'Donnell is now ready to come to the Riders and that the only snag is a signing bonus. This guy really should be sponsored by Advil. I can't wait for his first grilling by the local media.
------
I don't know if CFL pre=season football on TSN will work or not---especially the first games when a lot of guys playing are guys you have never heard of and guys you will never hear of again. I'll be interested to see the numbers.
------
What do you think the over/under is on horns being honked and middle fingers being given on Vic East between Park and the Ring Road is these days.
------
I've come to the conclusion that Facebook is a woman, because a man wouldn't ask "What's on your mind?"
at 6/13/2011

Without two fortunate bounces for Vancouver in the first 2 games it could well have been a sweep for the Bruins.

It is sad to think that Boston could have arguably won every game in this series, but they could lose the Cup in Game 7.

If the Bruins lose on Wednesday, the Canucks will be the first team to win the cup on the negative side of the goal differential.

It must have been painful for 'Nucks fans to see (Thelma or was it Louise?) Sedin take all those shots near end of game from the Bruin player and nobody, nobody comes to his aid.
..maybe the proper insult Milbury should have used was calling them "Hannah and her sisters"
...where's Gino Odjick, Tiger Williams, even Pat Quinn?...it's a no-win situation for VCR but geez.. show you guys have something other than dirty hits and ref baiting in your grit handbag.

Simpson said it alright. I couldn't believe it when I heard it. I have to wonder if CBC brass have spoken to him or not. We preach to take stupidity out of the game and then someone with a lot of power like Simpson says something that stupid is pretty classless if you ask me.


Also agree with you on the TSN exhibition thing, but at least the Rider game on the road is their 2nd pre-season game so we will see more of the vets.

LOVE the fact the CFL preseason is on TSN. I bet ratings will be strong to excellent

A lot of people think they don't like the Canucks because of all the Euros, myself included. But I got to thinking about Detroit. The Red Wings are loaded with Euros, yet everyone respects them. Therefore I've decided it's the way Vancouver plays, it's got nothing to do with nationality.

I have been reading that right now the hottest selling tickets in the world are to watch the 100m dash at the 2012 Olympics.