Boston had to have Game 3 on home ice and they got it---did they ever!  After a gutless cheap shot from Aaron Rome on Nathan Horton---one that hopefully gets Rome a suspension that lasts into next season, the Bruins got their game going and crushed the Canucks 8-1 in what was actually an entertaining hockey game despite the score. Hard hits, fast skating, great chances, good goaltending and plenty of emotion made for a decent contest if you take the Rome hit out of the equation.

1) Tim Thomas has been the better goalie over the first three games total.
2) What was Alain Vigneault thinking by leaving Luongo in the game with the outcome was no longer in question
3) What happened to the Canucks in the 2nd?
4) Chicago responded big time after the Torres hit on Seabrook. Are we seeing a repeat of that from the Bruins. Early on, the answer would be yes.

Make no doubt about it, if Vancouver wins Game 4, they will win it all, but if Boston wins it, I think it goes 7 meaning there will be many Canadians glued to their TV's on Friday night.
-----

Don Cherry brought up an interesting suggestion during "Coach's Corner" last night. When talking about the Rome hit on Horton, he said Boston should be allowed to have another player dress to take Horton's spot and that its not fair that each team should lose a player because of the injury Horton sustained. I can't say that I disagree. It would be the 13th forward or the 7th or 8th defenceman dressing, but it would be a body. In this case, I'm guessing Tyler Seguin would have gotten the call.

I don't understand why some Rider fans can't get it through their skulls that Andy Fantuz is not going to miraculously show up at training camp. I don't know how many times that its been said Fantuz is property of the Chicago Bears and until he is released by them---which can't happen during the lockout----he can't play for anyone else. Thus the answer to the question will Fantuz be back before the season opener is at this time an overwhelming NO!!!!!! 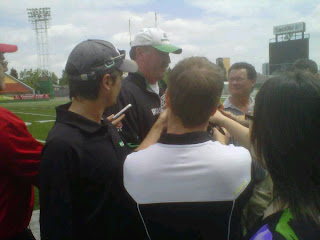 Riders coach Greg Marshall didn't have to field any Fantuz questions today, but he did field a bunch of them after Day 2 of training camp. Players that impressed were receivers Terrence Nunn and Dominic Bolden along with Weston Dressler (DUHHHH!!), Eddie Johnson and Byron Bullock. Bullock is a guy that intrigues me because I don't know where the Riders fit him in, but they have to. He's too good to spend a season on the practice roster.
------
The Red Sox are 4-0 after pasting Weyburn 18-1. The Regina bats are blazing to start the season. They have put up a staggering 56 runs in their first four games. I really can't see that pace continuing, but I'm sure Rob Cherepuschak and gang will keep it going for as long as they can.
-----
Why do the Blue Jays trot Frank Francisco out to the mound? The guy is HORRIBLE!! He is instantaneous defeat. Francisco came on in extra innings last night in Kansas City and before you knew it the Royals had the victory. The Mike Napoli for Francisco deal was not one that Alex Anthopoulos will want to be remembered for.
-----
USC got their 2005 US College Football championship taken away from them on Monday. Who cares? The fans celebrated, the team celebrated, and you can't take that away. I think rescinding that or any championship is dumb. Would Rider fans care if the 2007 Grey Cup was taken away right now. Don't think so! Then again.................
-------
That's all I got. In the words of Brad Paisley and Keith Urban, "When you're living in a world that you don't understand, grab a few good buddies and start a band."
at 6/06/2011

Rome will be suspended. There is no doubt about that. With Campbell now gone as disciplinarian, this is a chance for the NHL to show how serious they are towards head shots. If Rome gets 1-2 games, they aren't serious. If he gets 10 or more, it will show players the league isn't screwing around with this anymore. The ball is in the NHL's court.

I don't know what type of message Vigneault was sending by leaving Luongo in. That was wrong and embarassing for him.

Can't help but wonder what Sid thinks as he sees no efforts to reduce headshots. Rome should be gone for a long time. Horton took about three and a half to four strides after passing the puck before getting belted. I'm all for physical hockey, but that's ridiciulous.

The hit was 14/15ths of a second after the puck left his stick according to TSN, and in the same breath they talked about how Lou was asked to come out after 5 and said NO!

I think that if there is a suspension it will be 1 game max.

I would take Bullock over Stewart if I had to. I agree with you on Bullock, I think he can be an impacct player.

If the Red Sox keep this up, they'll be unbeatable. Great job Rob!

I love the idea that Cherry pitched last night. I hope the NHL was listening.