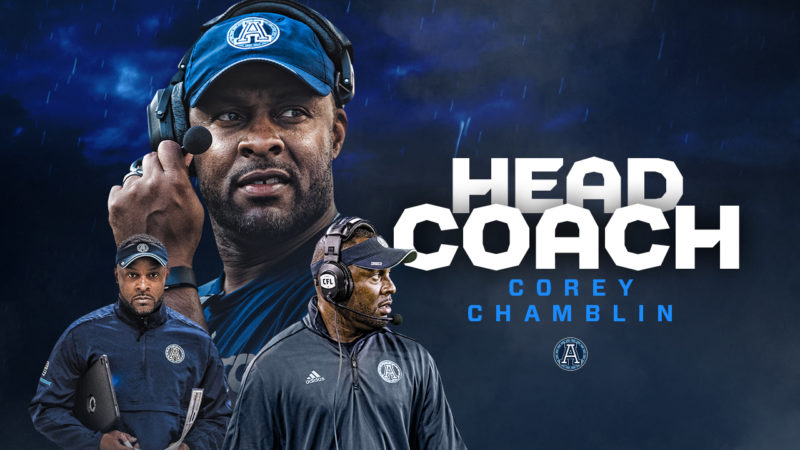 The Toronto Argonauts announced today that Corey Chamblin has been named the 44th head coach in team history.

Chamblin, 41, returns to Toronto after spending 2018 at the University of Arkansas as quality control and defensive backs coach. Chamblin saw immense success as the Argos defensive coordinator in 2017 and under his guidance, the Argonauts defence produced six East All-Stars, tied for the league lead in sacks (50), led the CFL in opponent rush yards/game (82.8), finished second in both opponent net offence/game (329.1) and opponent yards per play (6.1). It was his stellar defence in the 105th Grey Cup that saw a 109-yard fumble recovery for a touchdown and a game-sealing interception in the end zone help cement the club’s record 17th championship.

“We believe Corey is the best possible fit to help bring the Toronto Argonauts Football Club back to the top of the CFL,” said team President Bill Manning. “Our organization’s ultimate goal is to win Grey Cups for our city and fans and bringing Corey back to Toronto is the first step in reaching those goals.”

“I am extremely excited to be back in Toronto,” said Head Coach Corey Chamblin. “This is a very talented roster with whom I have experience with. Winning Grey Cups are the objective and with the support I have received from ownership, the sky is the limit for this team.”

“Corey’s leadership, CFL experience, and familiarity with the Argonauts family catapulted him to the top of the list of candidates and made the decision clear who our next Head Coach will be,” said GM Jim Popp. “He is a former Grey Cup-winning Head Coach so he knows what it takes to win and we are thrilled he is back in Double Blue.”

Are they any places in the GTA named Chamberlain?

Good, maybe he can invite his pals Oday and Taman to join him. Let them prove themselves football legitimate.

Hmmm... Chambetlain already pulling his I'm in charge of who I want on the roster act undermining gm Popp.


Guy brought us a Grey Cup. You can shit on him all you like, but he got us to the top of the mountain. Good luck in Toronto Coach C!