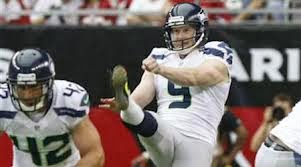 Jon Ryan spoke via phone from an airport in Mazatlan, where he had been watching a little baseball and talking to some execs of a team there about creating a partnership with the Portland Pickles, a summer league team of which is a part owner.

He was on his way to Seattle, where on Friday night he will host a comedy show headlined by his wife, Sarah Colonna, at the Historic Everett Theater in Everett.

If all this activity sounds like Ryan settling into retirement following his release by the Seahawks in August and then also being released by the Buffalo Bills two weeks later, though, think again.

In fact, after selling his house in the Seattle area shortly after his release, he settled in Los Angeles where he said he continues to work out regularly.

“I have so much time to work out I’m doing more than I normally do when I was with the Seahawks,’’ he said. “I’m definitely ready at a moment’s notice.’’

Ryan, 37, said no NFL team has approached him yet, but he also notes that the season isn’t over. “We’ll see what happens over the next three weeks,’’ he said.

As a native of Canada, Ryan says a return to the CFL is always an option.

Then he notes that he just heard about the XFL’s plans to put a team in Seattle in 2020.

“It doesn’t look good for playing for the Seahawks,’’ Ryan said. “But I might still be playing for Seattle again someday.’’

Anything, he says, to stay in the game.

The last three months have been his first fall months without football in his life in 30 years.

He says it hasn’t been as difficult to watch games on television as he thought it might. He joked that he and Colonna wake up most Sundays and say they won’t spend the day watching football and then inevitably do. Ryan says he checks the stats of all the punters in the league and watches the Seahawks.

But being without football has confirmed how much he wants to play again.


“I just love it too much,’’ he said. “I just miss being on the field every day and playing football. So yeah, I’ve made it clear to myself that I’m not ready to walk away from it yet. It’s just weird not playing football. It’s been a little bit of an adjustment. But at the same time, I think I am not done yet. So I think I know I will be playing somewhere again, even if it might not be in the NFL.”

What Ryan doesn’t have is any bitterness toward the Seahawks for the decision to draft Michael Dickson in the fifth round, which led to Ryan’s release in August after a 10-year career in Seattle in which he became the team’s career and single-season leader in just about every significant punting category.

Ryan vowed when Dickson was drafted to do whatever it took to keep the job, but he also vowed to help Dickson in any way he could.

He’s kept a close eye since on Dickson and says “the kid is phenomenal. He’s a once-in-a-generation-type talent at that position and I just have nothing but respect for him. It was just kind of fun to be able to work with him for those two or three months and hopefully I taught him a few things about the business. But he’s truly one of those guys at that position that you are only going to see once in a generation, I think.’’

He laughs when asked if he saw what is Dickson’s most famous play — his decision to run out of the end zone against Detroit when he had been instructed to take a safety in the final minutes.

“I honestly didn’t think it was the smartest move,’’ he said. “I texted (special teams coach) Brian Schneider after the game and said ‘this kid is a cowboy, for sure.’ I’ve done some crazy things but I don’t think I would have done that. But obviously it worked out pretty good.’’


After being released by Seattle, Ryan signed the next day with Buffalo to compete with starter Colton Schmidt after the Bills’ backup punter suffered a season-ending injury.

But after 12 days, and getting three punts in two preseason games, Ryan was again released.

“I feel like it was just so rushed at that point in training camp,’’ he said. “… I really just didn’t have enough time.’’

He returned to Seattle to help with the selling of his house a few weeks later and hasn’t been back since, making his appearance at Colonna’s show Friday also something of a homecoming.

He’s hosted for Colonna three times before, all in Seattle or Tacoma.

But he says this isn’t the start of a post-football career.


“No, not at all,’’ he said. “Honestly, I just want to get up in front of some Seattle people again and be around them. I don’t see ever doing this outside of the Washington area.’’

Very sad to watch this unfold. Sure wish he would have just retired on his own terms!