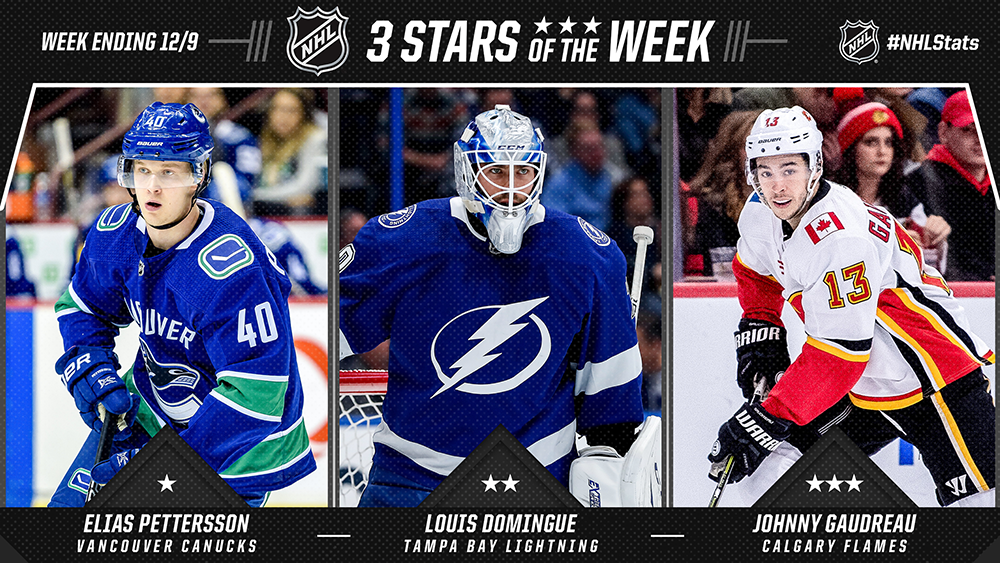 Pettersson led the NHL with 2-6—8, including two game-winning goals, in three outings to power the Canucks (13-16-3, 29 points) to a pair of victories. He collected one assist in a 3-2 loss to the Minnesota Wild Dec. 4. Pettersson then scored his third career game-winning goal and added one helper in a 5-3 triumph over the Nashville Predators Dec. 6. He capped the week with 1-4—5, his second career five-point performance (also Nov. 2 vs. COL: 2-3—5), in a 6-1 victory against the St. Louis Blues Dec. 9. In doing so, Pettersson became the sixth rookie in the NHL’s expansion era (since 1967-68) to record multiple five-point games within a single season – and the second to achieve the feat before the end of December (also Bryan Trottier: 1975-76 w/ NYI). The 20-year-old Sundsvall, Sweden, native – who was selected fifth overall in the 2017 NHL Draft – paces all rookies with 15 goals, 15 assists and 30 points in 26 contests this season. His four game-winning goals also lead all rookies and share fourth place in the entire League.

Domingue went 3-0-0 with a 1.33 goals-against average and .957 save percentage to backstop the Lightning (23-7-1, 47 points) to a perfect four-game week, their sixth straight win overall and a six-point lead atop the NHL standings. Domingue turned aside 26 shots in a 5-1 victory against the New Jersey Devils Dec. 3. He then made 33 saves in a 3-2 triumph over the Boston Bruins Dec. 6. Domingue added 29 stops in a 7-1 victory against the Colorado Avalanche Dec. 8, stretching his personal winning streak to a career-high five games dating to Nov. 29 (2.38 GAA, .915 SV%). The 26-year-old St‑Hyacinthe, Que., native has compiled a 13-4-0 record, 2.95 goals-against average and .906 save percentage in 17 total appearances this season. His 13 victories share third place in the NHL and are just four shy of the League lead (held by Marc-Andre Fleury in 11 more games).

Gaudreau ranked second in the NHL with 2-6—8 in four contests to help the Flames (19‑10-2, 40 points) pick up three wins and move atop the Western Conference standings. He matched a career high with 2-2—4, his sixth career four-point performance, in a 9-6 triumph over the Columbus Blue Jackets Dec. 4. Gaudreau then posted two assists in each of his next two games, a 2-0 victory against the Minnesota Wild Dec. 6 and a 5-2 win over the Nashville Predators Dec. 8, before being held off the scoresheet in a 1-0 loss to the Edmonton Oilers Dec. 9. The 25-year-old Salem, N.J., native paces Calgary and sits seventh in the entire NHL with 12-27—39 in 31 outings this season. His 27 assists also share fifth place in the League (w/ Jack Eichel).
at 12/10/2018