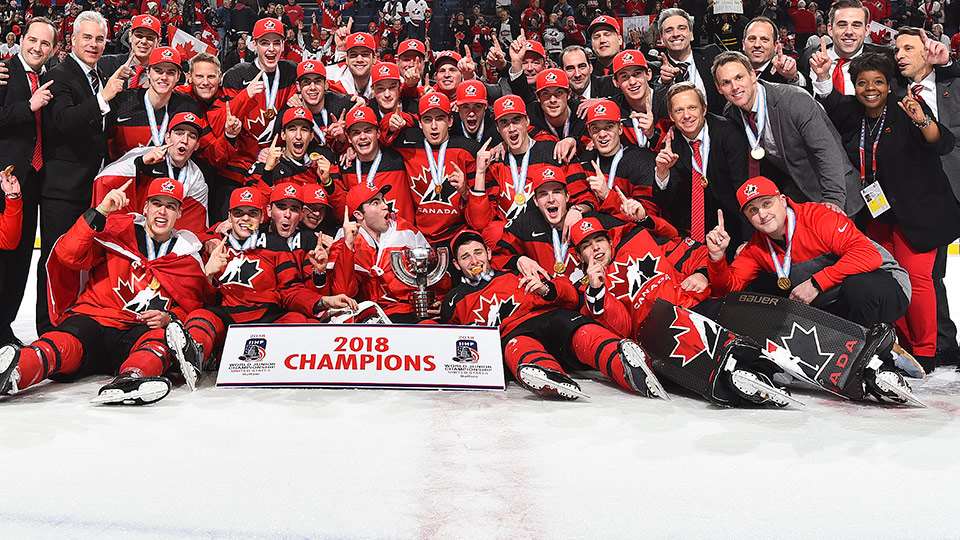 The world’s best junior hockey players will be skating for gold on Alberta ice at the 2021 IIHF World Junior Championship.

Hockey Canada, in partnership with the Canadian Hockey League (CHL), has awarded the 45th edition of the international tournament to the cities of Edmonton and Red Deer.

“To return to Alberta is an incredible opportunity for Hockey Canada and the IIHF World Junior Championship,” said Scott Smith, president and chief operating officer of Hockey Canada. “The province of Alberta and the cities of Edmonton and Red Deer have a history of hosting successful, world-class events, including the 1995 IIHF World Junior Championship in Red Deer, the 2012 edition of the tournament in Edmonton and the 2018 Hlinka Gretzky Cup last summer. We are confident in this committee’s ability to successfully execute on its vision for the 2021 IIHF World Junior Championship, and we look forward to working with them to ensure we leave a lasting legacy in Alberta and across the country that helps us continue to grow and foster the game from the grassroots to elite levels.”

Smith was chair of the site-selection committee, which also included Hockey Canada CEO Tom Renney, former Hockey Canada board chair Joe Drago and CHL president David Branch, and was supported by Dean McIntosh, vice-president of events and properties for Hockey Canada as the committee’s resource staff.

“Oilers Entertainment Group is thrilled to be able to continue our partnership with Hockey Canada, this time to help bring the IIHF World Junior Championship to Edmonton and Red Deer,” said Bob Nicholson, OEG CEO & vice chair. “We are continuing to build Edmonton’s international reputation as a destination for hockey and we know the hockey fans in our community will be excited to cheer on Team Canada on home ice.”

“On behalf of the Rebels organization, the City of Red Deer, our partners at Westerner Park and all junior hockey fans across Central Alberta, we are beyond excited to bring the IIHF World Junior Championship back to our community,” said Brent Sutter, owner, general manager and head coach of the Red Deer Rebels. “This marquee event was a game-changer for the region in 1995, and we’re sure fans from around the world will be embraced once again.”

“As a site-selection committee, finding the optimal site for the IIHF World Junior Championship is always our priority,” said Branch. As a partner, the CHL is instrumental in the hosting of the IIHF World Junior Championship on Canadian ice, sharing in the event legacy for the development of high-performance junior hockey across the country, and lending its players, coaches and support staff to participating teams. “The interest and excitement to host this special event remains high as we look to 2021 and beyond. Today is about celebrating the selection of Edmonton and Red Deer as co-hosts in 2021 and the teams, volunteers, staff and fans who will make the 2019 IIHF World Junior Championship in Vancouver and Victoria an unforgettable experience beginning later this month.”

The Government of Alberta has committed its support to the 2021 IIHF World Junior Championship.

“Alberta’s towns and cities are rich with hockey culture and our government is proud to support the 2021 World Juniors,” said the Honourable Ricardo Miranda, minister of culture and tourism for the Government of Alberta. “These championships will bring top-notch athletes and tourists from around the world to explore our beautiful province. This is an incredible opportunity for Alberta and I know co-hosting the games in Edmonton and Red Deer will be a winning combination.”

The 2021 World Juniors will be co-hosted at Rogers Place, the home of the NHL’s Edmonton Oilers and Oil Kings of the Western Hockey League (WHL), and at the ENMAX Centrium, home of the WHL’s Red Deer Rebels with regional economic impact expected to exceed $50-million.

“We're thrilled to partner with Red Deer again after a great Hlinka Gretzky Cup this summer,” said Mayor Don Iveson. “We're looking forward to showcasing our outstanding hosting skills as well as Edmonton's Rogers Place and Ice District to the world. Events like this have a significant local economic impact that will benefit Edmontonians and allow them to enjoy their ongoing love for hockey.”

"World Juniors is more than a hockey tournament. It is our national tradition. Red Deer is honoured to be a partner host City for the 2020/2021 World Juniors, especially given our strong community history of hosting Juniors in 1995", said Red Deer Mayor Tara Veer. "We will build on this proud heritage with our government and hockey partners. Hockey Canada, the Oilers Entertainment Group and the Red Deer Rebels are to be applauded for the hockey and Canadian history we are writing today, and for the opportunity they have secured for us".
at 12/06/2018