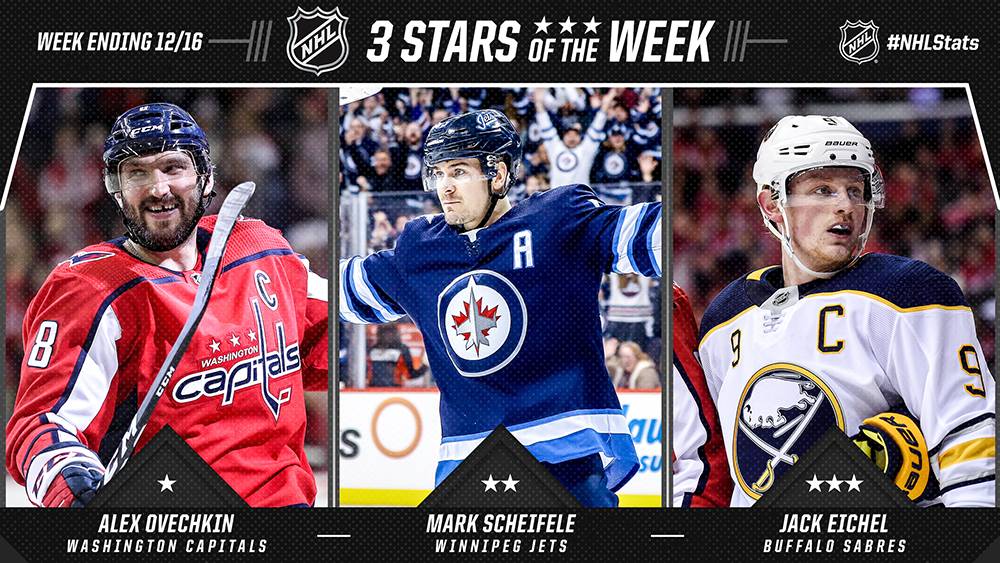 Ovechkin paced the NHL with seven goals in three games (7-0—7), highlighted by back-to-back hat tricks, to propel the Metropolitan Division-leading Capitals (20-9-3, 43 points) to a perfect week and their fifth straight win overall. Ovechkin scored three times in each of his first two outings, a 6-2 victory (including the game-winning goal) against the Detroit Red Wings Dec. 11 and a 6-5 shootout triumph over the Carolina Hurricanes Dec. 14. Those served as the 21st and 22nd hat tricks of Ovechkin’s career, moving him into a share of 11th place in NHL history (w/ Teemu Selanne). It also marked the second time Ovechkin has registered hat tricks in consecutive team games, a feat he achieved in the first two contests of the 2017-18 season. Ovechkin closed the week with one goal in regulation as well as the shootout winner in a 4-3 victory against the Buffalo Sabres Dec. 15. That extended his point streak to a career-high 14 games (17-6—23) and his goal streak to six contests (10-1—11), one off Ovechkin’s personal best set during his rookie season (Feb. 10 – March 8, 2006: 8-5—13 in 7 GP). The 33-year-old Moscow, Russia, native and seven-time Maurice “Rocket” Richard Trophy winner tops the NHL with 29 goals in 32 total outings this season (29-14—43), five more than the next-closest player.

Scheifele led the NHL with 5-6—11 in four games, including back-to-back overtime goals, to lift the Jets (22-9-2, 46 points) to their fifth consecutive win overall and into first place in the Central Division. He posted 1-1—2 in 6-3 triumph over the Chicago Blackhawks Dec. 11. Scheifele then recorded three straight three-point performances, started by 1-2—3 (including the primary assist on the overtime winner) in a 5-4 victory against the Edmonton Oilers Dec. 13. He scored the overtime winner in the following two contests, a 4-3 triumph over the Blackhawks Dec. 14 (2-1—3) and a 5-4 victory against the Tampa Bay Lightning Dec. 16 (1-2—3). In doing so, Scheifele became the second player in Jets/Thrashers history to register an overtime goal in consecutive team games as well as the second player in franchise history to post three straight three-point outings. The 25-year-old Kitchener, Ont., native ranks fifth in the NHL with 21-25—46 in 33 contests this season, highlighted by multiple points in each of his last five games (5-9—14).

Eichel ranked second in the NHL with 5-4—9 in four games to power the Sabres (20-9-5, 45 points) to a 3-0-1 week and into second place in the Atlantic Division. He collected 1-1—2 (including an assist on the overtime winner) in a 4-3 triumph over the Los Angeles Kings Dec. 11. Eichel then picked up one helper in a 3-1 victory against the Arizona Coyotes Dec. 13, followed by two goals in a 4-3 shootout loss to the Washington Capitals Dec. 15. Eichel capped the week with 2-2—4, his fifth career four-point performance, in a 4-2 win over the Boston Bruins Dec. 16. The 22-year-old North Chelmsford, Mass., native sits seventh in the NHL with 14-31—45 in 34 appearances this season, including 9-4—13 during an active six-game point streak.