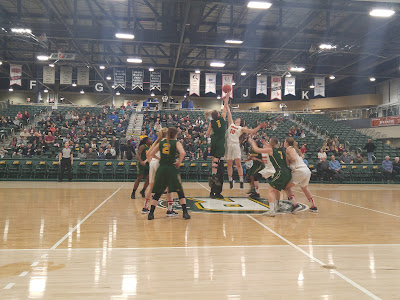 The University of Regina’s women’s basketball team was outscored in three of the game’s four quarters, but the Cougars were able to pull out a 66-60 win over Calgary on Friday night to clinch the best-of-three Canada West semifinal series at the Centre for Kinesiology, Health & Sport.

The Cougars advance to the conference championship game, which they’ll host against either Saskatchewan or Trinity Western next Friday night (7:00) at the CKHS.

Charlotte Kot led the Cougars with 14 points while Kyanna Giles scored 12 and added six rebounds despite only playing 21 minutes after being saddled with foul trouble for most of the night.

“It wasn’t the usual recipe for a win being outscored in three quarters, giving up more shot attempts, and turning the ball over more times than they did,” Cougars head coach Dave Taylor said. “But it was a great team win as we got great bench production, especially from Avery Pearce who was critical for us in the second half. Kyanna (Giles) played well coming off an extended rest due to foul trouble and gave us a spark, and we got great fifth-year leadership from Charlotte (Kot) who logged big minutes for us.”

After a first half which saw Regina go through a first-quarter scoring drought that lasted nearly seven minutes and Calgary take a double-digit lead at one point in the second, the Cougars exploded in the third. Regina went on a 15-3 run which included five points from Pearce, who had a big triple and also had a layup down low after getting an offensive board off her own miss. That turned a five-point Calgary lead into a seven-point Regina advantage five minutes later, and the Cougars took a 50-42 lead into the fourth after Carolina Goncalves and Pearce had layups on back-to-back possessions to end the quarter.

Calgary wasn’t nearly done, though. The Dinos went on a huge 14-2 run of their own and jumped back into the lead thanks to one of Brianna Ghali’s two triples on the night. A three-pointer by Shannon Hatch broke a tie game with 3:22 left on the game clock, but that would turn out to be Calgary’s final field goal of the night.

The Cougars took the lead back for good after Michaela Kleisinger buried a three-pointer with just over two minutes to go, and an incredible finish by Kyia Giles off a drive to the basket with 18 seconds left made it a two-possession game and all but locked up the win for Regina.

Besides Kot’s 14 points and the 12 points by Kyanna Giles, the Cougars also got nine points from Pearce, eight by Christina McCusker, and seven for Michaela Kleisinger who also led all players with 11 rebounds.

Ghali and Hatch both finished with 14 points for Calgary, which will continue its season on the road next weekend against the loser of the Saskatchewan/TWU series. Those two teams will battle in a Canada West third-place game, with the winner of that earning the conference’s second bid to the U SPORTS Championship in Regina the following weekend.

NOTES: Next Friday will mark the third consecutive season the Cougars have played in the Canada West championship game and the ninth time they’ll play for a conference title in 12 seasons under the direction of Taylor.
at 2/23/2018