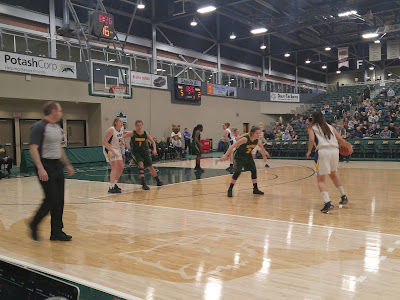 Kyanna Giles poured in a career-high 28 points to lead the University of Regina’s women’s basketball team to a 71-62 victory over UBC on Friday night in Game 2 of a Canada West quarterfinal sweep at the Centre for Kinesiology, Health & Sport.


The win gives the Cougars a two-game sweep over the Thunderbirds as the U of R becomes the first team to advance to the Canada West semifinals.

While Thursday’s win saw the Cougars jump out to an early double-digit lead and hold a comfortable lead the entire way, Friday’s game was a different story. Regina took the lead for good midway through the second quarter and though the Cougars built up a 12-point lead at one juncture in the third quarter, UBC battled back and it was a one-possession game for most of the first half of the fourth.

But the No. 2-ranked Cougars clamped down on defence down the stretch to secure the win. They only surrendered three points in the final five minutes of the game – all of which came on a Jessica Hanson three-pointer – and Giles hit a pair of three-pointers to help the lead balloon back up to 12 with two minutes to go.

Giles, who now has at least 20 points in six of her last seven games, eclipses her previous career high of 27 which she set earlier this season in a win over Fraser Valley. She was 11-for-18 from the field overall and 4-for-8 from three-point land in the win, while also pulling down six rebounds for the Cougars.

Hanson finished with a team-leading 19 points for UBC, while Maddison Penn collected 15 points and 12 rebounds to notch the game’s lone double-double. While the season ends for the Thunderbirds, head coach Deb Huband will expect to return the entire roster. Hanson, Penn, and Krysten Lindquist are the team’s elder statesmen but still have two full seasons of U SPORTS eligibility remaining, while all seven other Thunderbirds that played tonight are only in their first or second seasons.

The Cougars will now turn their attention to next weekend, which will see them host either Calgary or Victoria in another best-of-three series.

“We were able to make plays down the stretch when we needed to, and I’m extremely happy we got this done in two games,” Cougars head coach Dave Taylor said. “We need to have a good week of preparation heading into a best-of-three semifinal series, which is something we haven’t done in years.”

It’s been 16 years since the Cougars have played in a best-of-three Canada West semifinal. The Cougars beat Alberta in two straight games back in 2002 to advance to the conference final, and Canada West changed the playoff format soon thereafter to go to a Final Four format which saw a single semifinal game immediately followed by a single conference championship game. This year’s format will have two best-of-three semifinals next weekend and a one-game conference final the following weekend.


Next weekend’s semifinal series will again be scheduled for Thursday and Friday with a third and deciding game to be played on Saturday if it’s needed. All games will tip off at 7:00 PM at the CKHS.