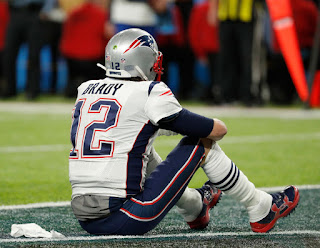 --It wasn't to be! If you're not a fan of the New England Patriots, you had to be smiling at the end of Super Bowl 52 because on this night, they couldn't get it done----but they came damn close and for a change, they didn't get the calls!

I didn't think the Eagles could do it.  I thought Nick Foles would crumble under the pressure. Pressure----what pressure!  Foles played like it was a Sunday in October instead of the biggest game of the year.  He was calm, cool and collected and he outduelled Tom Brady.  However, tell me you didn't think as Brady lofted that Hail Mary to the endzone that you thought for a split second that someone would come down with it and we might be off to overtime.

It was the most explosive game in NFL history as over 1100 yards in total offence were shared by the two teams who basically went up and down the field all night long.  There was one punt in the whole game.  It was back and forth right from the get-go with 84 points being scored.  Sorry CFL fans, but this one was better than the Grey Cup just for the fact that it was back and forth right from the start with each team marching down the field to score at will.  It had a CFL feel to it.  At the end of the day, the team you love to hate couldn't get it done.

The talk today will center around how they did it, but the talk will also center on two touchdowns that I thought were touchdowns, but others like Cris Collinsworth didn't.  By the way, Collinsworth spoiled what I thought was a great production by NBC.  Tell me he didn't have Patriots underwear on.  The Corey Clement touchdown was debatable, but I thought he scored even though there was a bobble. On the Zach Ertz touchdown, there was no debate.  Ertz had the ball and had taken two steps before diving into the endzone where he broke the plane. It's a TD. Sorry Cris Collinsworth, your argument that he didn't catch the ball was so off base.  At worse, the Eagles would have had the ball 1st and goal from the 1.  There was no debate.

As far as halftime went, that's a few minutes of my life I won't get back as Justin Timberlake was not solid as far as I was concerned.  In fact, the Grey Cup halftime show was better IMO

For Eagles fans, it will be a night they will always remember.  That first one is sweet! What now?  The Eagles have a decision to make with Foles who likely won't be back. If he does go, where does he end up.  If he stays, what does it mean for Carson Wentz?  As for New England, Brady says he will be back, but Gronk wouldn't talk about the future. Belichick will be back to take another run at it, but he needs to find a new offensive and defensive co-ordinator and his defence needs to be better.


--The Saskatchewan Roughriders may possess the best 1-2 QB combo in the league with Zach Collaros and Brandon Bridge and they without a doubt have the best WR group in the league.  If the rumours of Willie Jefferson having already signed a contract are indeed true, there is no doubt the /=S=/ have the best DE combo in Jefferson and the newly acquired Charleston Hughes.  Who saw that move coming?  When Justin Dunk texted me Friday afternoon asking if I had heard anything about this deal, I was flabbergasted.

Getting Hughes gives the Riders the best DE combo in the league. It might be the best DE combo they have ever had including the John Chick-Stevie Baggs pairing.  I don't know how Chris Jones pulled this one off, and frankly I don't care.  All I know is the pieces are coming into place. Yes, yes they are.  There is no doubt this team has gotten better. Are they better than Calgary? You can make that decision.

-Duron Carter is charged with possession of marijuana in Saskatoon. OMG! Say it isn't so! Big deal!  Marijuana is illegal for how many more months in this country? We'll soon be able to get a coke, a Lotto 6.49 ticket and some weed at a neighbourhood store won't we?  If Justin Trudeau is basically saying its OK to smoke weed by making it legal very soon, then who cares! If this had been done several years ago, we could have a conversation, but now?  Some people are making a bigger deal of this than it really is, but hey if you can give the Riders a black mark so be it right? The truth is Duron Carter just got caught doing something many are doing already. Let's move on!

--Steve Laycock will carry the home province colours at the Brier.  The Saskatoon rink took the Tankard in Estevan and now will be the crowd favourite when the Canadian men's curling championship hits the Brandt Center next month.  Laycock will be one of the favourites, and there is no doubt about that.  Will the drought end here? Wouldn't that be a story!  Some may cheer for Team Manitoba though as Regina's Braeden Moskowy will be the 3rd on the Reid Carruthers rink.  It is shaping up to be a great week of curling.

--Jennifer Jones made it six Scotties with a win in Penticton.  The Winnipeg rink has tied Colleen Jones for most Scotties titles with six.  One has to think Jennifer will break that record and that the only thing that can stop her is Rachel Homan.  There is no doubt they are 1-2 in this country.

--Michelle Englot's competitive curling career came to an end at the Scotties.  What a career it was. Michelle represented this province and this country as well as Manitoba in very fine fashion over the years. She should be recognized and will be recognized for her accomplishments at the right time.

--That's all I got.  Have a great week!  Enjoy the day Eagles fans, you deserve it!


Great game! Philly found a way! Couldn't agree with you more on Collinsworth. His Brady love was over-the-top!

Couldn't help but wonder if more green and white confetti will fly in November.


If the PM of our country can smoke weed, so can Duron!

Can't help but think Hufnagel got fleeced by Austin and Jones on this trade. Did Huf know about this flip? If he did, I can't see him making that deal.


The only thing about the Duron thing that angers me is his immaturity. You gotta be smarter than this! He needs a network around him to make sure he behaves. Is Jones the one we want leading that network? Million dollar talent with a 10 dollar brain!

Your man Duron also has a court date in Winnipeg. He's quite a roll-model, I want my son to be just like him.

Kory Sheets did the same thing and was vilified. It's life. Friday night I had wine, edibles, and watched a movie with my ladyfriend. Good times and there is nothing wrong with it. More people should get baked.


Nothing wrong with the Hatriots getting beat. I also ask the question PDR does. I just don't see Hufnagel making that move with Hamilton if he knew what would happen.

Whoever has Mike Reilly has the best QB combo in the league end of discussion.

How is Laycock a favorite at the Brier? I'd say they are 6th, behind the likes of Carruthers, McEwen (likely Wild Card), Epping, Gushue and Jacobs. Hopefully he can have a great week and make the playoffs but I'd hardly call them a favorite.