What a fantastic weekend at the Brandt Centre as the Regina Pats celebrated their 100th anniversary with their Centennial Celebrations. 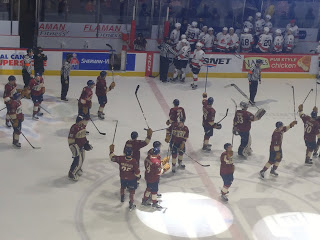 Have the Pats planted a seed of doubt in the Warriors mind after what happened this weekend.  I am guessing the answer is no, but those wondering when and if this team would turn it around and get their you know what together may have shown they are ready to do so with just a handful of games remaining.

Regina played right with and was better than Moose Jaw over the three-game set and the results showed that.

It was late last year when Regina took both ends of a home-and-home that sent Moose Jaw spiralling downwards.  Did they learn their lesson?  Was the weekend a turning point for Regina? We will find out over the next few months, but hold on because it should be a fun ride.

Sunday's game was preceeded by the NHL All-Star Celebrity Classic on Saturday afternoon and what an afternoon it was as NHL greats like Wendel Clark, Scott Niedermayer  and Brian Propp twirled around the ice as did former Pats Garth Butcher and Mike Sillinger.  One former Pat stole the day in the mind of this blogger though. 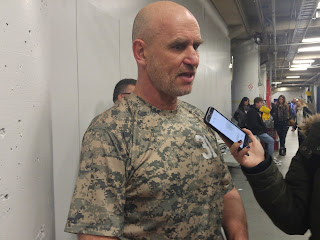 "Steady" Eddie Staniowski is 62 years old folks.  62 years old!  There he was patrolling the pipes to start the game for Team Saskatchewan. In his one period of work, he stood on his head making several big saves much to the disbelief of Team WHL who thought they had scored a couple of times. As Jarret Stoll said after the game, "Are you sure he is as old as they say he is?"  This weekend that brought together the military and the hockey team was one Staniowski had to take great joy in seeing the careers he has had in both.  My first Pats games at the old Exhibition Stadium had him in the net and admittedly the best I have seen in a Regina uniform that I can remember was Josh Harding.  Seeing Staniowski do his thing was fabulous to see regardless of whether he was 42 or 62. It was a treat.  It was also great to help Colby Armstrong to a night we may never see again.

Armstrong had joked he would donate money to a charity for every point he got so at one point Kelly Chase came to the penalty box and said add a couple of assists for Colby.  Did we ever! Every goal that was scored no matter what team saw the former Red Deer Rebel and Saskatoon native get an assist. The now-Sportsnet analyst ended up with four legitimate points and he was a great sport about it as we talked after the game.

Before I forget, it was not me who referred to Dale Derkatch as "Derek" during the game.  That was the guy in between the benches and not your friendly neighbourhood substitute Pats PA guy.  Derek Derkatch??!! Yeesh----and in the Brandt Centre too!

What also was a treat was Friday night at the Armouries.  As Rod Pedersen and myself did the Sportscage upstairs at the Armories, the stars of yesterday came pouring in.   Walking right past us were the likes of Niedermayer, Dale Derkatch, Niedermayer, Darryl Sutter.  It was a who's who of guys I had watched live at the Agridome and on TV.   It was surreal.  I had to leave at 6 to get to the U of R to do my basketball duties and when it came time to leave, I truly didn't.  I even had offers to stay, but sadly I couldn't.  I think it's safe to say I missed a good night and one I probably wouldn't have forgotten for a long time.

--By the way, did you get to Hometown Hockey? If so yay or nay? I wanted to get down there, but didn't get the chance. It looked good on TV!

--The debate is going on in the curling world. Did Rachel Homan do the right thing against Denmark or not? Homan removed a stone that was grazed by a Danish sweeper as it settled in the house. Graze or not, it was a good shot, but the Canadian skip tossed it out of play without a discussion or anything.  Many are coming to Homan's defense saying she played by the rules which technically she did.  Others are roasting her including those in the Canadian curling community.  What she did was right, but she handled it terribly and she probably considering the rock was not affected in any way should have just carried on.  Denmark's skip said after the game that karma came back to Homan. I can't argue that.  By the way, do we really have doping in curling?  One of the Russian ---I mean "Olympic Athletes from Russia" players on the mixed curling team tested positive for an illegal drug. In curling? Oyyyyyy!

--The Jake Harty signing by the Riders is an interesting one. Didn't think there was a need for any more receivers of his value, especially Canadian ones.  You already have Rob Bagg, Devon Bailey, Josh Stanford and Mitch Picton.  I think it's safe to say competition is a great thing.  My spidey senses also tell me this team is ready to make a major move via trade, but I don't know what the plan is and when it will be executed if indeed something big is coming.  Stay tuned!

--Have we come to an idea as to who won free agency?   They didn't win, but I like what Montreal did after it seemed as if they forgot that things were going on.  Calgary did a nice job in locking up Jagared Davis, Roy Finch and Davaris Daniels before free agency, but once you look at what teams did after free agency started, you have to look and see what the Riders did even though they said they weren't going to make a splash.  BC also shored up both their offensive and defensive line so we may not be able to declare a winner until the season actually starts, but those three teams were at the top of my list.


--I am interested to see how CFL Week is going to go in Winnipeg next month.  With the Jets capturing the imagination of the Winnipeg sports fan and for good reason, will enough go out to take in what we saw in Regina last year.   Could the Jets success turn CFL Week into a bust?  If it does, and I certainly hope it doesn't, it will tell me two things    1) Bring it back to Regina 2) Remember this when you look at moving the season up and competing with the Stanley Cup playoffs. Although it does sound like the latter will move up so the CFL can get some additional $$$$ from the NFL Network if what I continue to hear is accurate.

--In a statement never before uttered, NHL salaries are getting out of control.  I'm sorry, but the Calgary Flames giving Mikael Backlund 5 years at over 6 million a season is beyond ridiculous. What is even more ridiculous is this gives the agent for soon to be free agent Patrick Maroon the ammo to get a contract in the 6.5-7 million dollar range.  That also is ridiculous.  Backlund has 34 points in 59 games and is 29.  Maroon is 29 and has 29  points  in 55 games.  Both shouldn't be getting anywhere close to that in my mind.  I know hockey salaries are out of whack and this is a prime example.

Hunter and Miller must be seething after losing two of three to the Pats. We might get a MJ-Regina 1st round matchup. MJ will have to pick their game up and if they are to win that.

Great job this weekend on the PA. Are you the full-time guy now?


Niedermayer could still play today if he wanted to and be a contributor to some team. Met him at HH (which was good) and told him that. He laughed hard at that.

Yes, I agree Scott Niedermayer could still play in the NHL today. As for Pats sweeping MJ, great job, but keep in mind their top scorer Burke didn't play either game. Not taking anything away from great Pats wins, just saying that would be like Steel or Mahura missing both games. Also, so glad for fans and players that the game was indoors. Crisp -35 with the wind last night was rough.


As good as Niedermayer was, I thought Cliff Ronning was better and he has been out of the NHL for how long?

Anon 3 Yes, Burke did not play for MJ, but Regina played their "backup" goalie for all three games as well while Moose Jaw had their starter in net. That's just an excuse!


If the Riders are oh so close to the cap, it makes me wonder if the Harty signing means another "name" player is about to leave.


It's awfully quiet from the west of Regina today!

MJ's Sheen is just plain and simple an idiot. Why is he even out there? To be fair though, Gabrielle is the same for Regina.

Completely agree on the Backlund salary. This guy isn't even a top six forward and he is getting over 5 million a year. The agent for Maroon and other plugs will look at this and say if he can get it so can our guy. As a result, Maroon and others will get 6 1/2 or 7.

It is because of this that there will be labour unrest when the next CBA comes around.

The amount of money NHL'ers (and other pro leagues) are dishing out is just stupid.

Really liked what the Riders were doing until they botched the Muamba thing.


Those were a lot of no-names you announced yesterday as far as alumni goes. Completely realize a lot of guys are still playing in the pros and couldn't be there, but don't you think there should have been some recognition for those guys.


Homan should be embarassed. Totally in the wrong in that moment.

Homan is a kid, she should be embarrassed for that. Life learning experience on the world stage for sure.


The "Burke didn't play" is a lame excuse.

She's not a kid, she should be more humiliated than ever then! No blaming it on being a kid, just like those kids on the farmland