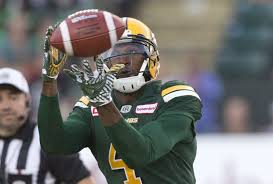 Unable to renegotiate his contract, the Edmonton Eskimos have released receiver Adarius Bowman.
In 10 seasons with the Riders, Bombers and Eskimos including the last seven in Edmonton, the 32 year old has accumulated more than 9000 yards and 48 touchdowns. His best year was 2016 when he had 120 catches for almost 1800 yards and eight TD's

At 32, Bowman suddenly becomes one of the most intriguing names available on the open market, and the explosive 6-foot-3 pass-catcher gets a jump on many of the other stars who will become free agents on Feb. 13 when free agency officially opens.

Bowman’s release, while unexpected for many, has likely been a looming possibility for Brock Sunderland and the rest of the Eskimos’ front office because of a roster bonus he was scheduled to get today. While the Eskimos have also lost 2017 league-leading receiver Brandon Zylstra to the NFL’s Minnesota Vikings, star receiver Derel Walker is back under contract after agreeing to an extension with the team signing Vidal Hazelton to an extension Monday.

Hazelton appeared in 11 games this past season for Edmonton where he caught 55 passes for 709 yards and four touchdowns. In three CFL seasons, the former East Division Nominee for Most Outstanding Rookie has appeared in 35 games and has caught 152 passes for 1873 yards and 13 touchdowns.