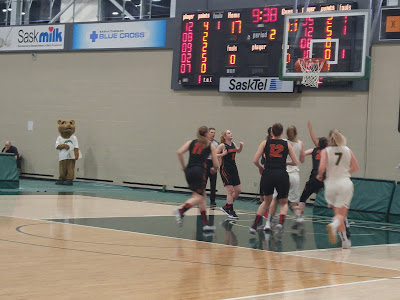 It wasn’t pretty at times, but the University of Regina’s women’s basketball team held on for a 61-58 victory over the Calgary Dinos on Thursday night as the two teams opened up a best-of-three Canada West semifinal series at the Centre for Kinesiology, Health & Sport.


The Cougars looked to be reasonably in control after a Kyia Giles layup put them up 11 midway through the fourth quarter, but a baseline jumper by Michaela Kleisinger turned out to be the only points Regina scored in the final five minutes of the game. Calgary chipped away at the lead and Liene Stalidzane’s three-pointer made it a one-possession contest with under two minutes to go, but that turned out to be the game’s final basket.

Calgary had a couple of good looks from three on its final possession, but the efforts from Brianna Ghali and Shannon Hatch both rimmed out and Regina was able to hold on for the win.

“That was a playoff basketball game out there and I’m obviously happy we were able to grind out a win,” Cougars head coach Dave Taylor said. “We haven’t had a lot of those type of games and at times we didn’t handle it very well, and we’ll need to focus on doing a better job of closing out wins moving forward.”

Calgary actually outshot Regina by a fairly significant margin – the Dinos shot 41% from the field compared to 32% for the Cougars – but turnovers proved to be the difference on Thursday. Calgary turned the ball over 24 times to Regina’s 15, and the Cougars had a 24-16 advantage in points scored off turnovers.

Charlotte Kot only played six first-half minutes after picking up a pair of early fouls, but ended up leading Regina with 12 points and tying for the team lead with seven rebounds. Kyia Giles added 11 points for the Cougars, while Carolina Goncalves and Sara Hubenig both chalked up nine points.

Stalidzane led all players with 14 points for Calgary, while Erin McIntosh and Hatch both finished with nine points and 11 rebounds. The Dinos suffered from the early loss of Laura Grabe, who picked up three fouls in the span of a minute and a half – including two in five seconds – and fouled out four minutes into the second half. Bobbi Jo Colburn also fouled out in the fourth for the Dinos.

The two teams will meet again on Friday night. The Cougars will look to close out the series and advance to a Canada West championship final which they’d host next weekend on home court, while Calgary will look to extend it to a third and deciding game on Saturday.
(Braden Konschuh/U of R Athletics)